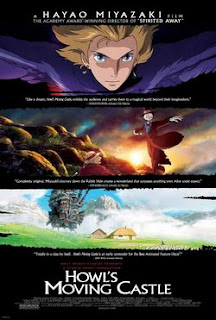 ANIMATION/FANTASY/SCI-FI/ACTION/ADVENTURE/ROMANCE with elements of war

Eighteen-year old Sophie (Emily Mortimer) lives a humdrum existence working in her late father’s hat shop in a dull town when powerful magic enters her life. She encounters the mysterious, handsome, and self-indulgent young wizard, Howl (Christian Bale, who delivers an embarrassingly stiff voice performance). However, the evil Witch of the Waste (Lauren Bacall, sly and droll) is looking for Howl, and since Sophie won’t cooperate, the witch casts a spell on Sophie that turns the unconfident young woman into an elderly woman, Grandma Sophie (Sofie Gråbøl). Determined to get the spell reversed, Sophie seeks out Howl again, and with the help of a scarecrow who moves by bouncing up and down on his pole (Sophie calls him “Turnip”), she finds Howl’s moving castle, an amazing contraption that walks across the landscape on spindly mechanical legs. Inside the castle lives Calcifer (Billy Crystal, who mixes comedy, mock menace, and a touch poignancy for a fine vocal performance), a fire demon (in the form of a ball of fire) that gives the moving castle the power to travel through time and space. However, Howl’s life is very complicated, and he fights for one side in an on-going war that leaves a terrible wake of destruction. It’s up to Sophie to free Howl of the curse that haunts him, while he plots to end the war.

The animated film, Hauru no ugoku shiro, or Howl’s Moving Castle, is another masterwork from revered Japanese animated filmmaker, Hayao Miyazaki. Howl received a 2006 Oscar nomination for “Best Animated Feature Film of the Year,” an award Miyazaki won in 2003 for Spirited Away. While Howl doesn’t reach the heights of Spirited Away, it is a brilliant film, and in many ways surpasses most American films of the last two years in terms of narrative and use of technical achievement in a creative way.

Miyazaki and his collaborators have once again created enormous panoramas of images – awe-inspiring, extravagant, spectacular visuals that coalesce into a narrative that is almost too big even for a Miyazaki film. His movies usually have a novel’s worth of sub-plots and enough characters for an ensemble film, which is the case with Howl’s Moving Castle, although the film really focuses on Sophie and Howl.

Howl’s Moving Castle is a quiet anti-war film. It may be hard to imagine that an animated film could capture the astounding devastation that war can bring to a city, (especially through aerial bombing) as well as a live action film does. However, watching the marvelous flying contraptions of war drop bombs on the countryside and in cities and towns in this film is breathtaking. Miyazaki even takes it up a notch. Magical creatures and monstrosities launch from the incredible flying battle warships and engage Howl in grand aerial battles. Strangely, this art (some of it computer generated) makes war seem cool instead of scary.

For all that this film is about war, Howl is at its heart a romance with war almost as a backdrop, and Sophie and Howl are superb star-crossed lovers. Miyazaki’s script (a loose adaptation of Diana Wynne Jones’ novel of the same title) deftly mixes romance with a magic-drenched fantasy of competing wizards and enchanted machinations. It all rings true, except for Christian Bale’s horrid voice acting as Howl. Howl’s Moving Castle is a visual assault on the senses, and it captures the imagination with magic and engages the heart with a love that overcomes all.