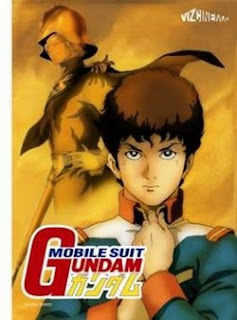 VIZ Cinema is pleased to offer a fun-packed weekend of anime as it welcomes Patrick Macias, Editor-in-Chief of OTAKU USA, on Friday April 9th for the latest in his ongoing series of TokyoScope Talks on Japanese cinema and pop media. On Saturday, April 10th, VIZ Cinema offers a special Gundam Movie Marathon. Three feature films featuring the iconic robot will be screened in the theatre, which features 35mm and digital projection and a THX®-certified sound system.

“From Astro Boy and Tetsujin 28 to Gundam and Voltron to Transformers and Gurren Lagann, giant robots and other fantastic machines and technology, or mecha, are instantly recognizable mainstays of anime,” says Macias. “There’s also a lot of cultural iconography intertwined with these machines and their operators, often presented as heroic warriors in the samurai warrior tradition. I look forward to tracing the nearly 50 year history and evolution of mecha along with some often humorous stories and latest examples. And don’t miss an awesome raffle giveaway featuring some tear-jerking treasures for super mecha fans!”

VIZ Cinema’s Weeknight Anime People makes a special weekend stop with an afternoon of Gundam! In the year 0079 of the Universal Century, the Earth Federation and its space colonies are engaged in an apocalyptic war. The rebellious Duchy of Zeon, using humanoid fighting machines called Mobile Suits, has all but vanquished the Federation. Now the Federation’s last hope is the prototype Mobile Suit, Gundam. When a twist of fate makes young civilian Amuro Ray the sole-pilot of Gundam, Amuro’s own battle begins – a struggle not only for the Federation’s survival, but for his own. General ticket price: $10:00; Combo tickets are $25:00. No further discounts will apply.

NEW PEOPLE offers the latest films, art, fashion and retail brands from Japan and is the creative vision of the J-Pop Center Project and VIZ Pictures, a distributor and producer of Japanese live action film. Located at 1746 Post Street, the 20,000 square foot structure features a striking 3-floor transparent glass façade that frames a fun and exotic new environment to engage the imagination into the 21st Century. A dedicated web site is also now available at: http://www.newpeopleworld.com/.
Posted by Leroy Douresseaux at 4:27 PM