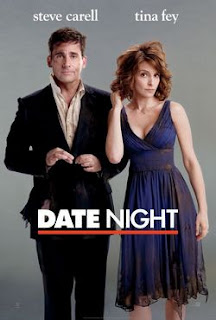 Steve Carell and Emmy-winner Tina Fey, two masters of some of the funniest and smartest television comedies in recent memory, come together for Date Night. Directed by Shawn Levy, Date Night follows a suburban New Jersey couple that comes to Manhattan for an out-of-the-ordinary night of fun and get the extraordinary night of their lives. This movie may not be Fey’s “30 Rock” or Carell’s “The Office” (their NBC television series), but it’s them and that’s enough.

They are sensible people Phil (Steve Carell) and Claire Foster (Tina Fey). This loving couple has two kids and a house in suburban New Jersey. Phil and Claire even have their weekly “date night,” a special night, in which they attempt to their dating years, as they dine on fish and potato wedges. Exhausted from their jobs and children, Phil and Claire rarely end their date nights with romance, or even sex. Then, they learn that a couple with whom they are friends is divorcing because the husband and wife started to feel like they were roommates and not really husband and wife.

On a whim, Phil decides a change of their regular date night plans in order to take Claire into Manhattan to the city’s hottest new restaurant, Claw. The Fosters, however, don't have reservations, and, once again on a whim, Phil decides to steal a no-show couple’s reservations. The Fosters are now the Tripplehorns, but the real Tripplehorns live dangerous lives, which the Fosters discover when two thugs, Armstrong (Jimmi Simpson) and Collins (Common), accost them over a flash drive the Tripplehorns apparently have. Soon, Phil and Claire are on the run, and their date night becomes a series of crazy adventures. Never mind saving their marriage; they have to save their lives.

Moviegoers who like Carell and Fey and want everything to turn out good for the Fosters will enjoy Date Night. Obviously, these acclaimed comic actors are the be-all, end-all of this movie. The material, however, is actually good, better than to be expected of Hollywood star vehicle. Screenwriter Josh Klausner has actually presented a rather snappy little scenario of a crime caper, although the way this caper ends is a bit clumsy and too pat. Director Shawn Levy, so adept at finding edge-of-the-seat thrills from practically any concept (see Night at the Museum

), has made a film in Date Night that is funnier than most cop/buddy action comedies with action that is just as thrilling and fun to watch.

don’t deliver their best work, but not for lack of effort. Carell’s wide-eyed mania, double-takes, and babbling are always just in time to strike the right note. Fey’s breezy performance is practically pitch-perfect for this film, an effortless turn from a comic actress flirting with genius. Date Night will likely make much of its audience want another date night with the team of Carell and Fey, but, in the meantime, we can enjoy this night again and again.