Review: "The Future of Food Takes" on Frankenfood 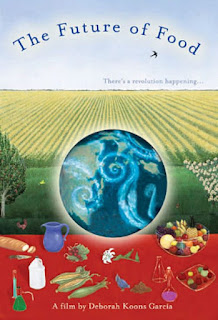 The Future of Food (2004)
Running time: 88 minutes (1 hour, 28 minutes)
WRITER/DIRECTOR: Deborah Koons Garcia
PRODUCERS: Catherine Lynn Butler and Deborah Koons Garcia
CINEMATOGRAPHER: John Chater
EDITOR: Vivien Hillgrove
DOCUMENTARY - Food
First, let me say that the documentary, The Future of Food, is essential viewing for anyone who eats – from high school students to senior citizens. If you have the intellectual capacity to understand the nightly news, you can get this film. This is an excellent example of a documentary that takes a very complicated subject and simplifies it so that it is of practical use to the viewer.
The Future of Food takes a look at the shadowy relationship between agriculture, big business (in the form of chemical companies that dominate the pesticide and herbicide industries and the seed industry), and government (in the form of Congressmen who take campaign contributions – really bribes – from those industries in order to pass legislation favorable to corporations). Director Deborah Koons Garcia takes an in depth examination of biotechnology, specifically genetically modified organisms, GMO (such as plant cells), and genetically engineering, GE, food.
The film also goes into the history of agriculture, and then shows how the birth of agri-business and the agricultural industry changed how humans had been cultivating crops for millennia. The agricultural industry dumped historical methods, which were time-proven safe, for new and potentially dangerous methods of cultivation without pause for examination and scientific study.
In Europe, where the national governments forbid the importation of GMO’s, such food is known as “frankenfood,” after the name Frankenstein. Some will remember the furor in the late 90’s and early 21st century that erupted when consumers and consumer advocates learned that genetically engineered corn was showing up in most processed corn foodstuffs such as corn chips, breakfast cereal, and taco shells. Scientists are unsure of what genetically modify food will do to people – good or bad. The GMO industry in the U.S. (and with the consent of Congress, the Courts, and the Presidency) isn’t willing to wait for scientific research of humans eating genetically engineered food.
Garcia’s film also looks at how big business’s GE practices have hurt family farmers through litigation and patent law. She also gives us a glance into how GE food and genetically altered seeds are finding their way oversees. Garcia has made a riveting documentary that takes advantage of her extensive research, archival footage, and wide-ranging interviews with farmers, farming advocates, and scientists.
The film’s weakness is a lack of commentary from the other side, which is likely because GMO companies, in particular Monsanto, which makes “RoundUp” herbicide, are on receiving end of this documentary’s criticisms and likely declined to participate. The film’s last 20 minutes are mostly spent on feel-good images and interviews that seem tacked on and a jarring divergence from the body of this documentary.
It’s as if after giving us a vision of food Hell, the filmmakers want to give us a wishy-washy assurance that everything will be OK. Still, The Future of Food is a must-watch, since you could be serving genetically modified food for dinner.
8 of 10
A
Saturday, February 18, 2006
------------------------
Posted by Leroy Douresseaux at 8:39 PM