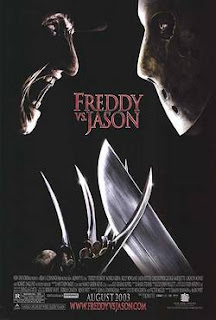 There’s little reason to say a whole lot about the long-awaited film showdown between two venerable movie maniacs, Freddy Krueger of the A Nightmare on Elm Street

films and Jason Voorhees of the Friday the 13th

films. It’s not simply a question of loving or hating it; when you get down to the bare bones, Freddy Vs. Jason is a truly awful film.

Freddy (Robert Englund) is in hell, fuming because he can’t get at the children of Elm Street in the town of Springwood. The parents and town leaders have found a few ways of keeping Freddy from the minds and dreams of their children. Thus, Freddy resurrects Jason (Ken Kirzinger) in hopes that Jason will scare up memories of Freddy. Of course, a plot, even a silly one, between two undead, homicidal maniacs is bound to fall apart. Jason gets out of hand, taking all the kills for himself, so Freddy decides to take him out of the equation.

Ronny Yu, who breathed new life into the Child’s Play

series with Bride of Chucky

, can’t do a damn thing for Freddy Vs. Jason

, and I totally blame the manically lame script. Whereas Bride was perverse, funny, and perversely funny, Freddy is clunky, dull, and painfully dry. I think the writers, Damian Shannon and Mark Swift, instead of telling a good story, used too much of their script to shoehorn into this new film all the continuity and characteristics of the two original series. Because of this, more than half of Freddy Vs. Jason is without a story beyond what amounts to preflight commentary. There are quite a few good moments in the film, but everything else is, to speak plainly and crudely, crap.

Although the film as some imaginative effects, it’s not nearly as imaginative as the original Nightmare films, which all surely had smaller budgets than this film. Oh, it does have its moments, but it’s cursed by all the things that typically make horror movies bad: poor acting, weak plot and script, and lack of imagination. As far as horror films goes, most fans are willing to overlook all those problems if the damn thing is scary, and Freddy Vs. Jason isn’t, not even close. It’s just vile and violent, mostly a self-parody that exudes an air of cynicism about itself and the audience.

We, who loved the originals, were programmed to come, despite the misgivings we had from the moment we first heard of that “they” were making a Freddy Vs. Jason movie. Some of us just can’t resist, so we deserve the occasional cow patty thrown squarely in our mugs. The real tale will be told when we see how many of us come back for more, because in the end we deserve a much better film than this.