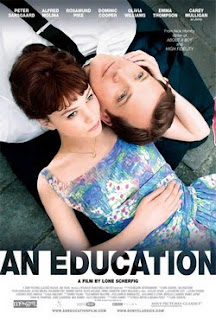 An Education is, at the very least, an exceptional coming-of-age film because it is exceptionally well-directed and well-written, and the actors give high-quality performances. However, it is Carey Mulligan’s star-making turn that anchors An Education.

Set in England in 1961, An Education focuses on Jenny Mellor (Carey Mulligan), a bright schoolgirl who is focused on taking and passing the A-levels, the exams that could help her get into Oxford. She meets David Goldman (Peter Sarsgaard), a charming, older Jewish man, and the two begin a relationship that steadily leads to romance. David even manages to charm Jenny’s protective parents, Jack played by Alfred Molina, giving his usually fine performance, and Marjorie (Cara Seymour).

David introduces Jenny to his fast lifestyle and to his friends, Danny (Dominic Cooper) and Danny’s girlfriend, Helen (Rosamund Pike, who is so radiantly beautiful that she steals practically every scene in which she appears). Jenny becomes torn between studying for a place at Oxford and enjoying the more exciting and fun alternative lifestyle that David offers, but then, she must also confront the darker side of David’s freewheeling lifestyle.

In creating Jenny Mellor, Carey Mulligan fashioned the kind of female character that carries a drama all the way to victory. Mulligan convincingly gives Jenny that cheeky arrogance which makes high school age teens believe they know how to live a much better life than any adult they know has ever lived. Jenny is a clever girl, and Mulligan makes sure her smarts shine through every time. This is a rich, multi-layered performance that absorbs everything that An Education

is trying to convey to its audience and makes it crystal clear.

Mulligan’s wonderful turn almost eclipses the exceedingly fine performance by the underrated Peter Sarsgaard as David. Sarsgaard deftly keeps David’s secrets close to him, making David act as the perfect foil for Jenny’s haughty smarts, but Sarsgaard also gives David an edge that is somehow too sweet to resist. Sarsgaard’s wonderful contribution and Mulligan’s terrific performance make An Education a coming-of-age story that will work its magic through the ages.