Review: Why Did I Get Married Too? 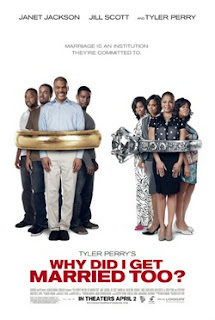 We last saw them in the 2007 film, Why Did I Get Married?, working through marriage and relationship issues at a beautiful house in the snowy mountains of Colorado. Now, Why Did I Get Married Too? reunites those four close couples. They have gathered together in the Bahamas for their annual one-week reunion. They’re eager to reconnect and share news about their lives and relationships, but there are some changes and looming troubles.

Best-selling author and popular psychologist, Patricia (Janet Jackson), and her successful architect husband, Gavin (Malik Yoba), show their friends smiles, but their marriage is deeply troubled. Successful attorney, Dianne (Sharon Leal) and her supportive husband, Terry (Tyler Perry), once had sexless marriage, but while there is now plenty of lovemaking, a secret threatens to destroy their union.

Angela (Tasha Smith) and Marcus (Michael Jai White) still argue all the time, but now Marcus has a successful new career as a television sports commentator. Angela, who once criticized Marcus for not having a job, is now jealous that Marcus makes more money than she does, and that envy drives her suspicious that he is cheating on her.

Shelia (Jill Scott) replaced her emotionally abusive and philandering husband, Mike (Richard T. Jones), with the former Colorado sheriff, Troy (Lamman Rucker). However, a recent move, a new baby, and Troy’s difficulty finding a job have put a strain on their marriage. Then, Mike also decides to visit the Bahamas.

was a scandalous relationship comedy and engaging reunion drama. It had plenty of soap opera theatrics and over-the-top drama with a capitol “D.” Why Did I Get Married Too? is also filled with theatrics and big “D” drama, but this second film is also darker and edgier. These squabbling couples now have even bigger problems, problems that would give marriage counselors pause. In each case, husband and wife are unsatisfied with each other, and instead of talking through their problems, they scream at each other, rant and rave, and storm out the door.

It’s fun to watch… sometimes. Other times, it’s painful to watch – not only because the anger is so raw, but also because sometimes the couples’ problems seemed contrived. This might be Tyler Perry’s best effort at writing emotional character drama and at constructing multi-layered conflict. This may also be his worst screenwriting simply because the quarreling and marital problems come across as greatly exaggerated. Perry packs this movie’s two hours with wall-to-wall marital discord; then, he ties it up with a pat happy ending that simply cannot wash away the grit Why Did I Get Married Too? leaves in the viewer’s mouth.

This is still a Tyler Perry movie, so it is entertaining, and there is also a cameo at the end that adds much needed sweet to the previous two hour’s sour. Still, with all the arguing the characters do here, the question is not Why Did I Get Married Too? but why are any of them still married!