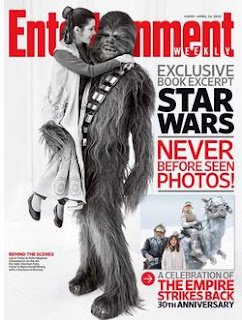 George Lucas celebrates the 30th anniversary of his landmark sequel by opening his vault of rare and never-before-seen photos for an upcoming book, and this week’s issue has the exclusive excerpt. Star Wars

hit theaters on May 25, 1977, and it was unlike anything anyone had ever seen. However, when most Star Wars aficionados go back to watch their favorite installment from the franchise it is not the original film, but its follow-up, The Emperor Strikes Back

, that fans gravitate towards. EW explains why The Empire Strikes Back

The book also has great quotes from the cast and crew such as:

Mark Hamill: “Actually, Harrison and I never fought in either picture. It was Carrie and I who had the screaming matches from time to tie, though afterward neither of us could remember what they were about”

Carrie Fisher: “Eric Idle had returned from Tunisia, where Monty Python were shooting Life of Brian [1979]. And he brought over what I believe he called ‘Tunisian Table-Cleaner,’ which was a beverage. Well, Harrison came over and the Rolling Stones came over, and I think we stayed up most of the night. So when we arrived at Cloud City, we were very happy.”