Review: "Spirited Away" is Pure Magic 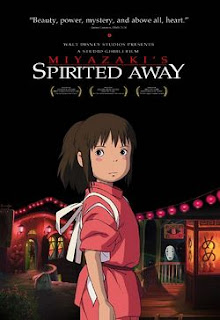 TRASH IN MY EYE No. 45 (of 2003) by Leroy Douresseaux
Sen to Chihiro no kamikakushi (2001) – animation
Running time: 125 minutes (2 hours, 5 minutes) COUNTRY OF ORIGIN: Japan
WRITER/DIRECTOR: Hayao Miyazaki
PRODUCER: Toshio Suzuki
CINEMATOGRAPHER: Atsushi Okui
EDITOR: Takeshi Seyama
Spirited Away (2002) – USA English dub
MPAA – PG for some scary moments
WRITERS: Cindy Davis Hewitt and Donald H. Hewitt – English script
PRODUCER: Donald W. Ernst
Academy Award winner
ANIMATION/FANTASY/ADVENTURE
Starring: (voices) Daveigh Chase, Suzanne Pleshette, Jason Marsden, Susan Egan, David Ogden Stiers, Lauren Holly, Michael Chiklis, and Tara Strong
The world’s best director of animated films is Hayao Miyazaki (Princess Mononoke), and even the masters at Disney represent with Miyazaki. In 2001, his film Sen to Chihiro no kamikakushi became the all-time highest grossing film in Japan, and in 2003, Spirited Away, the English language version of the film, won the Oscar for Best Animated Feature.
While moving to their new home, a ten-year girl named Chihiro (voice of Daveigh Chase) and her parents get lost on an overgrown stretch of road. At the end of the road, they find a lonely building that her father surmises was part of an abandoned theme park. Continuing to track through their discovery, the parents wander into the park where they catch the smell of cooking food. The parents begin to chow down on a veritable feast that they find in an empty restaurant. They don’t know that the food is enchanted and meant for the spirits. Within minutes, the magic transforms Chihiro’s parents into pigs.
Chihiro meets a boy named Haku (Jason Marsden) who tells her than the theme park is actually a rest haven for spirits. Haku tells her that he will help her and her parents, but she must wait. Meanwhile, Chihiro indentures herself to Yubaba (Suzanne Pleshette), a greedy and devious she-creature who runs the bathhouse that is the centerpiece of this magical world. Yubaba changes Chihiro’s name to Sen and forces her to work in the bathhouse while the girl struggles to find a way to free herself from slavery and her parents from the spell.
Whereas Miyazaki’s previous film Princess Mononoke was an epic tale of magic versus modern with the threat of a great war as the backdrop, Spirited Away is a magical fantasy in which the level of magic reaches epic proportions. From beginning to end, Miyazaki fills every frame of the film with an eldritch charm that defies comparisons to any other movies, including his own work. It’s a dazzling display of the supernatural that held me spellbound. Witches, monsters, phantasms, spirits, creatures, mythical beasts, and wondrous landscapes populate the world of Spirited Away. It’s part Alice in Wonderland, part faerie tale, and part Japanese myth. Every frame is pure wonder and fantasy.
All of the magical creatures seem so real and so much real part of their environment. Miyazaki has a variety of fantastical beings for almost every scene, and it never seems like too much or too phony. So many filmmakers cheat now because of computer-generated imagery and throw anything on the screen just because they it pops into their heads. The wondrous people and things of Spirited Away seem natural and purposeful, a part of a divine order, not forced, but correct and part of a circle.
The film’s story and script, also by Miyazaki, isn’t so much about plot as they are about the imagination, the magic of the film’s world, and, in the end, about growing up and losing the magical corners of youth where ethereal, unreal, and surreal things exist and happen. Chihiro/Sen’s adventure is a wonderful one, and Miyazaki so draws you into Spirited Away that you feel the presence of the supernatural as much as Chihiro does, and like her, you hurt from the loses that come with growing up and getting older.
This is more than just a great animated film; this is simply a great film. There are times when it did seem a bit long, and Miyazaki’s craft seemed too polished, too perfect, but a master like Miyazaki can’t help but be overbearing at times. He’s a filmmaker and a magician. Spirited Away has to be seen on the big screen; it’s the only way to truly feel the awe-inspiring enchantment of the most fantastical film since Terry Gilliam’s The Adventures of Baron Munchausen.
There are a lot of fantasy films and films about magic, but only once in a generation is one so resonant with the mysterious of power miracles, magic, and fantastic beings that the film itself feels other worldly. Spirited Away is the supra fantasy of this time.
9 of 10
A+
NOTES: 2003 Academy Awards: 1 win: “Best Animated Feature” (Hayao Miyazaki)
2004 BAFTA Awards: 1 nomination: “Best Film not in the English Language” (Toshio Suzuki and Hayao Miyazaki)
----------------
Posted by Leroy Douresseaux at 7:51 PM