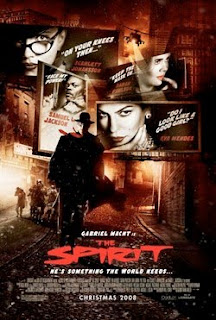 The Spirit is a comic book character created by the late Will Eisner. From June 2, 1940 until October 5, 1952, The Spirit

appeared in a 16-page comic book that was inserted into newspapers the way the comics section, the coupon pages, and Parade magazine, etc. still are. Some readers called it “The Spirit Section

.” In late 2008, Eisner’s hero finally made it to movie theatres in The Spirit, a film written and directed by a comic book creator turned movie director, Frank Miller. Among Miller’s creations is the graphic novel, 300

The Spirit (Gabriel Macht) is the guardian of Central City, but before he was a masked man, The Spirit was a cop named Denny Colt (Macht). Seemingly murdered in the line of duty, Denny escaped death and continued to fight crime, working outside the law as The Spirit. He fights crime from the shadows, and his war takes him to the city’s rundown warehouses, to deep in the damp catacombs beneath the city, or to the windswept waterfront, among other unsavory places. No place is too high, too low, or too dangerous for this masked crusader.

His most fearsome adversary is The Octopus (Samuel L. Jackson), a loud and flamboyant kingpin of crime with a penchant for mass murder. The Octopus plots to destroy Central City and to conquer the world, but first he needs to augment his powers with the legendary Blood of Heracles. On its way to Central City, the vase containing the blood falls into the hands of an old acquaintance of The Octopus, Sand Saref (Eva Mendes), who also has a past with The Spirit. Now, The Spirit must face both The Octopus, who is determined to finally kill him, and Saref, the woman who once broke his heart and who may now break him.

is dazzling, even brilliant at time. The shimmering colors, the extravagant costumes, and the lavish sets, as well as the shifting environments and complicated landscape that is the vibrant Central City. The characters are generally good, especially The Spirit and Dan Lauria’s Commissioner Dolan; Eva Mendes’ bombshell Sand Saref stands out among all the movie’s female characters. Sam Jackson’s Octopus is somewhere between edgy-meets-whacky and too over the top.

The Spirit was generally panned by critics and fans and was a box office failure. I think this film is too visually adventurous, and it is certainly experimental and daring in blending the cool static graphics of comic books and the basic compositional visual style of Film-Noir with cutting edge cinematography and computer enhancement and effects.

The film’s problem is that there is a disconnect between Frank Miller’s storytelling, in particularly the screenplay, and how the actors perform that story. On the technical end of the film, Miller seems to have gotten what he wanted. Directing the narrative and the actors’ performances and writing are the problems. The plot is okay and is quite straight-forward. The execution of the plot as a narrative is the problem. The story is awkward and has too many weird and/or unnecessary digressions. Quite a bit of dialogue is either too mannered or too stylized and when the actors perform the dialogue it sounds awkward and staged.

Still, The Spirit is too gorgeous to be considered a bomb or a failure. Its lustrous colors seem natural, almost organic compared to the look of Sin City and 300, two movies adapted from Frank Miller comic books. Focusing on what is good about The Spirit suggests that Miller has a future as a movie director, because this movie is just too visually alluring and too imaginative to be lumped in with truly bad movies.