Review: "Anchorman" is Odd and Funny 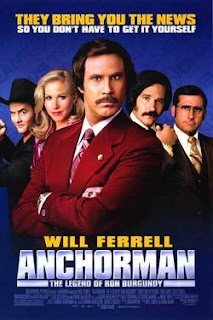 TRASH IN MY EYE No. 121 (of 2004) by Leroy Douresseaux
Anchorman: The Legend of Ron Burgundy (2004)
Running time: 94 minutes (1 hour, 34 minutes)
MPAA – PG-13 for sexual humor, language and comic violence DIRECTOR: Adam McKay WRITERS: Will Ferrell and Adam McKay PRODUCER: Judd Apatow CINEMATOGRAPHER: Thomas Ackerman (D.o.P.) EDITOR: Brent White
COMEDY
Starring: Will Ferrell, Christina Applegate, Paul Rudd, Steven Carell, David Koechner, Fred Willard, Chris Parnell, Kathryn Hahn, Luke Wilson, Bill Kurtis, Monique McIntyre, and Danny Trejo with uncredited screen appearances by Jack Black, Missi Pyle, Tim Robbins, Stephen Root, Ben Stiller, and Vince Vaughn
Will the actor/comedian Will Ferrell make a nice, long run of being a comedic leading man? He has a few hits behind him, and even if he ever falters as the star, he’s funny enough to lift quite a few movies to that next level by playing funny and crucial supporting roles.
In Anchorman: The Legend of Ron Burgundy, a film in which he co-wrote, Ferrell is Ron Burgundy. In 1970’s San Diego, he rules the city as the most popular anchorman of the most popular local TV news broadcast. He’s a legend, mostly in his own mind, and he’s God’s gift to women – if only they knew that he isn’t much of a journalist and his news skills rely heavily on a TelePrompTer.
Burgundy is also the captain of his station’s news team, a fellow cast of cads that includes a lecherous beat reporter named Brian Fantana (Paul Rudd), Brick Tamland (Steve Carell), a mentally challenged weatherman, and Champ Kind (David Koechner), a chauvinist, dude cowboy sports reporter. All is well in their world of ladies and parties until Veronica Corningstone (Christina Applegate), an ambitious female with her eye on being a network anchorwoman, arrives to rock their world. For Ron, it’s love at first sight, but all goes bad when Veronica becomes his partner both personally and professionally.
Anchorman is quite silly and filled with lots of belly laughs, but it also has a surprising number of satirical and sardonic moments. The humor recalls the mocking antics of Mel Brooks 70’s classics like Blazing Saddles, but the humor here is often deadpan and blunt. It’s also self-mockingly serious and also flat out hilarious. Too bad, the story is soft and the script is mostly a blueprint for jokes, gags, and general silliness.
Will Ferrell is his usual funny self, but the Burgundy character is a bit odd and off-putting. It’s not one of Ferrell’s more endearing characters, but he has a knack of making the most annoying characters very funny, even when they’re under your skin. The supporting cast is quite nice. Fred Willard embodies 70’s kitsch, and the three actors that make up Burgundy’s crew are fantastic, especially Carell and Koechner who play their parts with a frightening, scene stealing relish. Ms. Applegate’s performance is a bit odd; she plays Veronica in a never where between cardboard character dumb blonde and sly vixen, but with the gumption to make her character surprise us at every turn.
Anchorman will likely stand out as one of the year’s funniest comedies, but in the long run, it may be remembered as an oddity, perhaps a forgotten oddity. But I’m hoping it hangs around, even with some kind of cult status.
7 of 10
B+
--------------------
Posted by Leroy Douresseaux at 6:56 PM