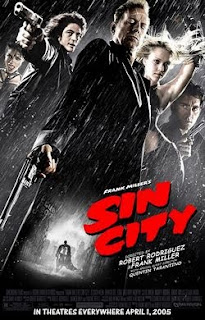 Robert Rodriguez, director of films like Once Upon a Time in Mexico

and the Spy Kids

. Miller, who blew up in the 80’s with by revitalizing and reworking Marvel Comics’ Daredevil and DC Comics Batman character in Batman: The Dark Knight Returns

and Batman: Year One

, had already said “no” about a dozen times, according to Newsweek magazine, with Rodriguez being the 12th.

However, Rodriguez wouldn’t give up. He invited Miller to Austin, TX for what was supposed to be a test shoot, but what was really Rodriguez’s opportunity to show Miller what he already done in pre-production to make the film look like Frank Miller’s Sin City and not Robert Rodriguez’s Sin City. Rodriguez had already shot a short piece, an adaptation of a Miller Sin City short story “The Customer is Always Right,” with Josh Hartnett and Marley Shelton playing the roles. Miller was convinced, and the footage reportedly also amazed the actors whom Rodriguez wanted to cast in the feature film when he showed it to them.

, (or by its full title Frank Miller’s Sin City

) is literally the comic book. This isn’t a film adaptation of a comic book character like the Spider-Man, X-Men, and Batman franchises. This is a movie as a comic book – a frame by frame (or panel by panel, in the case of a comic book) transfer of pictures from a comic book onto film and translated into moving pictures and a film narrative. Let it be called Rodriguez and Miller’s Sin City, and, thus far, it’s best movie I’ve seen this year.

The film adapts three of Miller’s Sin City graphic novels, which are set in and around Basin City or, as it’s better known, Sin City. The Hard Goodbye

features Marv (Mickey Rourke, in prosthetics), a tough-as-nails, nearly impossible to kill street fighter/killing machine, who is out for revenge for the killing of a hooker named Goldie (Jamie King), who showed him a good time and the only touch of kindness he ever received. His search leads him to Kevin (Elijah Wood), a psycho serial killer who moves and bounces around like Spider-Man.

The second is The Big Fat Kill, which finds Dwight (Clive Owen), one of the few Sin City good guys, trying to help the hookers of Old Town, after they unknowingly kill Jackie Boy (Benicio del Toro), a cop – a corrupt cop, but still a cop, and his posse. Killing a cop will end the truce that’s protected the ladies of Old Town via a deal that keeps the mob and the cops out of Old Town, as long as the cops are paid off and the girls never kill a cop, even one who gets rough with them. Now, Dwight has to keep evidence of Jackie Boy’s death a secret (by making sure his body, and then later, his severed head, not get into the wrong hands). Dwight’s lover and leader of the Amazonian prostitutes, Gail (Rosario Dawson), and a ninja super ho named Miho (Devon Aoki) assist him, but they find themselves up against a ruthless one-eyed (the other is a gold ball) mob henchmen named Manute (Michael Clarke Duncan).

The final vignette is That Yellow Bastard, which is actually split in two. One part plays before “The Hard Goodbye” and “The Big Fat Kill” and the other closes the main section of the film. In the first part, Hartigan (Bruce Willis), a good cop with a bad ticker saves Nancy (Makenzie Vega) an 11-year girl, from Rourk, Jr. (Nick Stahl), a raging pedophile and the son of the powerful Senator Rourk (Powers Boothe). Although Hartigan saves the girl, his partner (Michael Madsen) shoots him down to keep him from killing Rourk, Jr.. In the second and closing installment, Hartigan ends up in prison on trumped up charges because of the senator’s influence. After getting out, he has to protect the grown up Nancy Callahan (Jessica Alba) from Yellow Bastard (Stahl), who is Rourk, his skin made yellow by the special medical treatments given to repair “the damage” Hartigan did to him in the first segment of Bastard.

Rodriguez, who insisted that Miller get a co-director credit (which forced Rodriguez to leave the Directors Guild of America because co-directors who aren’t siblings is a no-no), shot this film entirely before a green screen. The only things that are real are the actors, the objects they touch, and the cars they ride in. Everything else was digitally inserted later using special effects, such as in Sky Captain and the World of Tomorrow. The result is a digital painting in stark black and white with dashes of vibrant color – a red dress, gold hair, a yellow-skinned bastard, etc.

But is this movie good? It’s as good as it is groundbreaking. For all it’s visual flair and the fact that it really looks like a comic book brought to digital film live, the story and the characters are also riveting and engaging. I couldn’t’ take my eyes off the screen. This is power slap to the face like Pulp Fiction and The Matrix, where you get the hard-boiled crime story that enthralls in the former and the eye-popping and mind-bending technical explosion of the latter. Hell, this is better than The Matrix and Sky Captain. Comic book geeks and aficionados, hard core action movie junkies, and the young male demographic will likely love this; this mean baby of a movie was born for them. Anyone else who likes the daring in cinema and can stomach the strangest art films can also handle this, even if they, in the end, don’t like it.

Sin City does seem to run on a little too long, but even this minor quibble is for the best. It gives the large cast (that was anxious to star in this maverick project) more film time in which to shine. There are some truly good performance here – Stahl, Rourke, and Owen for sure. How can a true fan of movies miss this? Yes, it’s vile and almost pornographically violent, but violence looks great on the big screen. Besides, the opportunity to see Jessica Alba’s gyrating dance, Rosario Dawson’s super duper fine ass, and Jamie King’s breasts of a goddess are worth it.