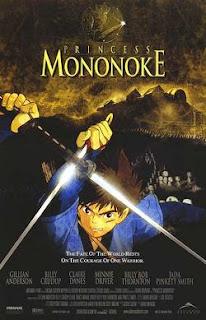 TRASH IN MY EYE No. 43 (of 2003) by Leroy Douresseaux
Mononoke Hime (1997) – animated
COUNTRY OF ORIGIN: Japan
WRITER/DIRECTOR: Hayao Miyazaki
PRODUCER: Toshio Suzuki
CINEMATOGRAPHER: Atsushi Okui
EDITORS: Takeshi Seyama and Hayao Miyazaki
Princess Mononoke (1999) USA release – English dub
Running time: 134 minutes (2 hours, 14 minutes)
MPAA – PG-13 for images of violence and gore
WRITER: Neil Gaiman – English screenplay
ANIMATION/FANTASY/ADVENTURE/WAR/ACTION
Starring: (English voices) Gillian Anderson, Billy Crudup, Claire Danes, Keith David, John DeMita, John Di Maggio, Minnie Driver, Jada Pinkett Smith, and Billy Bob Thornton
Many consider Hayao Miyazaki to be Japan’s greatest animator and one of that country’s finest directors. He has several films to his credit, including Majo no takkyubin (released in the U.S. as Kiki’s Delivery Service) and Tenku no shiro Rapyuta (Castle in the Sky). In 2003, he won the Oscar for Best Animated Feature Film for Spirited Away, the 2002 English language version of his film Sen to Chihiro no kamikakushi. However, his first real shot at mass appeal in the United States was the film known in America as Princess Mononoke.
The story centers on Prince Ashitaka (voice of Billy Crudup) who finds himself in the middle of a war between the elemental and spiritual forces of the forest and Tataraba, a human iron-mining colony. The town’s leader , Lady Eboshi (Minnie Driver) has conspired with a sly assassin named Jigo, sublimely voiced by Billy Bob Thorton, to kill the great forest spirit. Ashitaka meets San, the Princess Mononoke (Claire Danes), a girl raised by the Wolf God. San leads the animal gods of the forest against Lady Eboshi, who has also made her colony a haven for outcasts. Ashitaka walks a razor’s edge, trying to save both the humans and the forest before the two destroy each other, and, although he it not the title character, he is the story’s focus.
Although the drawing is not as polished and as classical as a Disney film, the animation in Mononoke is nothing short of breathtaking and fantastic. While so many Western animators use computers to augment their films, Miyazaki used traditional hand drawn cels, reportedly correcting by his own hand 80,000 of the films 144,000 cels. The animation takes on a scope of epic proportions while simultaneously being romantic.
Miyazaki and his animators created a film that manages to be encompass the film genres of action, adventure, and war, while being a dramatic film of beautiful and poetic touches. The depth of the storytelling is novelistic in its approach. It has so much going on that the audience cannot help but be captivated and enthralled even if the references to Japanese mythology goes over their heads. The voice acting for the English dubbing is excellent, which includes not only those actors mentioned prior, but also Jada Pinkett-Smith, Gillian Anderson, and Keith David. They did have a good script with which to work. Fantasy novelist and comic book scribe Neil Gaiman, creator of the Sandman comic book, wrote the film’s dialogue in a friendly American vernacular Mononoke.
Fans of anime and animated films cannot miss Princess Mononoke. For people who loved epics like The Lord of the Rings, this film fits right in that vein. It stands, not only as an accomplishment in animation, but a special achievement in movie making.
9 of 10
A+
--------------------
Posted by Leroy Douresseaux at 7:05 PM