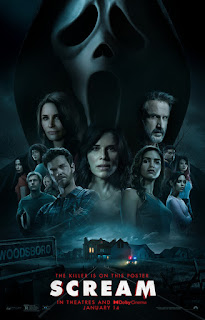 [Fans will want to see the entertaining new “Scream” film in movie theaters – right now.  But for everyone else, there is nothing here worth a trip to the local theater.]

Scream is a 2022 slasher horror film directed by Matt Bettinelli-Olpin and Tyler Gillett.  It is the fifth film in the Scream film series, which began with the 1996 film, Scream.  In Scream 2022, a new series of murders forces familiar faces to return to Woodsboro, where they will confront a horrible legacy.

Informed of the attack on Tara, her estranged sister, Samantha “Sam” Carpenter (Melissa Barrera), returns to Woodsboro with her boyfriend, Richie Kirsch (Jack Quaid), reluctantly along.  Sam is not only troubled by the attack on Tara, but she is also dealing with her shocking connection to one of the original Woodsboro murderers.  With this new Ghostface adding to the body count, Sam turns to an original Woodsboro survivor for help, the reclusive, Dwight “Dewey” Riley (David Arquette).

Although he is initially reluctant to get involved, he contacts two other survivors, Sidney Prescott (Neve Campbell), and his ex-wife, television host, Gail Weathers (Courteney Cox), to inform them that the killings have started again.  Although she is the center of the new killing spree, is Sam Carpenter willing to stay and fight the killer, or will she simply run away from her past, again?

I'll start of my critique of the new Scream by repeating what I said of 2011's Scream 4.  As a slasher film, Scream 2022 is entertaining.  Ghostface remains a terrific and terrifying horror movie villain, although in the new Scream, he does lots of slashing and stabbing, whereas Scream 4's Ghostface slaughtered his victims to the point that they seemed like butchered meat and offal.  Neve Campbell, Courteney Cox, and David Arquette are still the “old reliables,” of this franchise, no matter how old they look or how much plastic surgery they may have had done.  Scream's new cast is, for the most part, pretty good.  As Sam Carpenter, Melissa Barrera seems like she could carry this franchise going forward – at least for two more films.  When the new Scream plays it straight, it is a better-than-average slasher horror film.

Scream 4 was the work of the franchise's original writer, Kevin Williamson, and original director, the late Wes Craven (to whom the new film is dedicated).  Scream 4 was a sequel and essentially a remake of the original 1996 film, but it was critical of two huge cultural changes that had occurred since the first film – Internet celebrity and social media culture.  [Williamson is only an executive producer on the new film.]

The writers and directors have offered in Scream 2022 a film that is a sequel and also a reboot.  This film is intimately connected to the original film, but it essentially reboots Scream with a new cast of both victims and survivors.  The original Scream was self-referential and was also steeped in pop culture, especially concerning horror films.  The new Scream essentially mocks both the idea of film sequels and the fan culture that is obsessed with sequels, prequels, reboots, and every detail concerning their making.

I thought Scream 4's rant against social media and celebrity seemed like the creation of two guys whose aging was putting an every widening gap between them and the core audience for the kind of films they made.  The new Scream seems like the work of dudes who don't appreciate the kind of fans they attract with the kind of the films they make.  In a way, if they can't stand the fan heat, they should get out the slasher film kitchen.

Anyway, I think the motivation behind the Ghostface of the new Scream would have worked better for the Ghostface of Scream 4.  So, I'll say about the new Scream what I said about Scream 4: it is best when it focuses on its great villain (Ghostface) stalking his victims.  For the most part, hardcore fans of this franchise will want to see Scream 2022 in movie theaters.  Anyone else who is interested can wait for on-demand and streaming.

Posted by Leroy Douresseaux at 5:18 PM