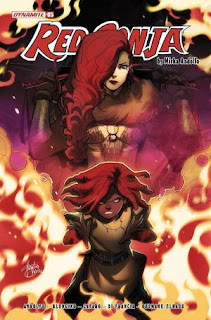 Red Sonja remained a fixture in comic books from then until about 1986.  There have been several ongoing Red Sonja comic book series, and the latest, Red Sonja Volume 6, is under the guidance of popular Italian comic book creator, Mirka Andolfo.  It is written by Andolfo and Luca Blengino; drawn by Giuseppe Cafaro; colored by Chiara Di Francia; and lettered by Jeff Eckleberry.  In this new series, Red Sonja accepts the bounty to bring a girl named “Sitha” to a broker who will send her to her true home.  The girl, however, becomes attached to Sonja and calls her mother.

Red Sonja Volume 6 #5 opens in the mountains between Britunia and Hyperborea at the edifice known as the “Mad King's Fortress.”  There, Red Sonja and her companions, Samosh the warrior and Setubia the old sorcerer, struggle to free Sitha from the influences of “Xamul,” the demigoddess of fire, wind, and fury that resides in her.

Now, Sonja and Sitha must go east, beyond the Vilayet Sea.  Between the foothills of the mountains of Kithai is a village, and there, only a priestess of Xamul can free Sitha, the “Daughter of Fire,” from Xamul.  But it is a place that only women can access, and first, they must face “the First Law.”

THE LOWDOWN:   In July 2021, Dynamite Entertainment's marketing department began providing me with PDF review copies of some of their titles.  One of them is Red Sonja Volume 6 #5, which is the latest of several Dynamite Entertainment Red Sonja comic books that I have read.  This is also only the seventh issue of a Mirka Andolfo comic book that I have read.

Andolfo and Luca Blengino continue their epic story of sword and sorcery, which is also a mother and her daughter story (of sorts).  The writers offer big changes and move the story to new strange, faraway lands.  It is pure sword and sorcery and Robert E. Howard.

In issue #5, a bevy of artists and colorist unveil this story to readers, and they catch all of the epic scope of what Andolfo and Blengino are spinning for readers.  They don't miss a beat, and this Red Sonja series, with its offbeat notes, continues to be a winner.

Posted by Leroy Douresseaux at 5:35 PM