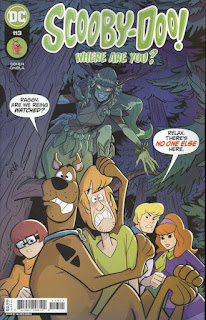 Scooby-Doo, Where Are You? #113 opens with “Unboxing Day,” which is written by Ivan Cohen and drawn by Valerio Chiola.  The story finds Mystery Inc.:  Scooby-Doo, Shaggy, Fred, Daphne, and Velma in Cooper's Woods.  They are there to help their friend, DIY television star, “Builder Billy,” and his sister, Betty.  It seems a ghostly dryad, a forest spirit from Greek mythology, is vexing Billy's attempt to build a box fort treehouse.  Can Mystery Inc. solve the mystery of the dryad in time to help Billy and Betty build the treehouse?

The second story, “Elf King Swing” is, as usual, a reprint story and is written by Terrence Greip Jr. and drawn by Anthony Williams and Jeff Albrecht.  [This story was originally published in Scooby-Doo #49 (cover date: August 2001).]  Mystery Inc. is in Germany to help an old chum, Baron von Gerhard a.k.a. “Willie.”  His legacy:  a barony, a dense forest, and Munehof, his family's ancestral home, are being threatened by “The Elf King.”  It is a figure right out of Germany's literary history, and he wants to claim Willie and Mystery Inc. as his own.  Can our heroes solve the mystery of the Elf King and save the von Gerhard legacy.

Scooby-Doo, Where Are You? issues #111 and #112 were two of the best issues of this series that I'd read in some time.  Issue #113 is not so hot.  The new story, “Unboxing Day,” does have an interesting angle in the treehouse building, but the dryad does not cut it as a villain, as far as I'm concerned.

The reprint story, “Elf King Swing” does not interest me at all, so it is best that I say nothing.  However, I do want to note that it references “Erlkonig,” the famous poem by Johann Wolfgang von Goethe, concerning a supernatural being that stalks a young boy who is on horseback with his father.

So, I will only recommend Scooby-Doo, Where Are You? #113 to people who collect Scooby-Doo comic books.  And until next time, Scooby-Dooby-Doo!

[This comic book includes a six-page preview of the original graphic novel, “Superman of Smallville,” by Art Baltazar and Franco.]