Comics Review: "KISS: Phantom Obsession #5" Gets it In the End 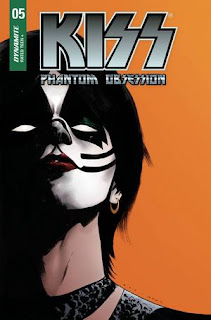 As Kiss: Phantom Obsession #5 opens, Paul, Gene, Ace, and Peter learn the secrets of Darius Cho.  That means that they must also confront the secrets of Lyra Tzen, one of Cho's employees.  Since being kidnapped by Cho and presumed dead, KISS has faced it all:  megalomaniacs, giant monsters and robots, and now, a killer android.  Can the greatest Rock N' Roll band in the world survive its final showdown with the true mastermind behind it all?

THE LOWDOWN:  In July 2021, Dynamite Entertainment's marketing department began providing me with PDF review copies of some of their titles.  One of them is Kiss: Phantom Obsession #5, which is only the fifth Kiss comic book that I have ever read.

In the first four issues of Phantom Obsession, writer Ian Edginton offers a breezy adventure that is part Kiss comic book and part superhero comic book.  I thought that Phantom Obsession #4 was the best issue of the series, but issue #5 surpasses it.  The sad back story and the awful costs of a tech billionaire's arrogance and lack of self-awareness come full circle.

As this is the final issue of the miniseries, I think Phantom Obsession will read really nicely as a trade paperback.  For one thing, readers can see the evolution of the art team of illustrator Celor and colorist Valentina Pinto.

Posted by Leroy Douresseaux at 5:12 PM