Comics Review: "JAMES BOND: Himeros #4" Will Put the Viper on Your Ass 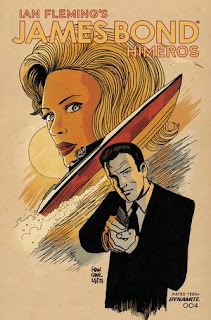 Over the past 50+ years, Bond has made sporadic appearances in comic books, but Dynamite Entertainment has been steadily publishing James Bond comic books since early 2016.  Their latest James Bond comic book is James Bond: Himeros.  It is written by Rodney Barnes; drawn alternately by Antonio Ruso, Pierluigi Minotti, and Giorgio Pontrelli; colored by Adriano Augusto; and lettered by Social Myth Studios.  In Himeros, 007 finds himself caught in a web of powerful people who will kill to keep their connections to billionaire financier and notorious sex trafficker, the late Richard Wilhelm, from coming to light.

James Bond: Himeros #4 opens in West Brompton, London.  Anton Bates, an arms dealer who enjoyed Wilhelm's services, is meeting with Defense Minister Abara of Nigeria.  Bates wants to sell the minister a new weapon, called “the Viper,” but who is the viper in this deal?

Meanwhile, after having survived a series of deadly assaults by the Bates' assassin, Kino, Bond and Sarah Richmond, Wilhelm's right hand man, fly to Wilhelm's island.  There, Sarah will retrieve Wilhelm's books that, along with what she knows, have made her a target.  Can the two escape the death that seems to await them at every turn?

THE LOWDOWN:  In July 2021, Dynamite Entertainment's marketing department began providing me with PDF review copies of some of their titles.  One of them is James Bond: Himeros #4, which is one of several Dynamite James Bond comic books I've read.

Writer Rodney Barnes has been slowly building this series to its concluding fifth issue.  Like the second issue, this penultimate fourth issue simmers with drama and trauma.  Like the third issue, Barnes also throws gasoline on the fire for some hot action scenes.

This fourth issue also introduces the series' third artist.  Like the previous illustrators, Giorgio Pontrelli strikes the right tone for the secret agent style of this story and also captures its tropical and sunny settings.  Adriano Augusto's colors always strike the right look regardless of which artist is drawing an issue.  “Himeros” is the Greek god of sexual desire, and after reading James Bond: Himeros #4,  dear readers, I desire the final issue.

Posted by Leroy Douresseaux at 12:42 PM