Comics Review: The Invincible RED SONJA #7 Has Fanservice, Too 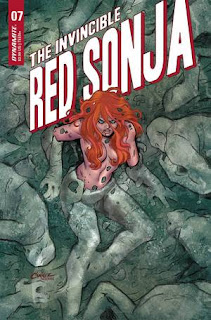 The Invincible Red Sonja #7 opens in Scathach.  Or does it?  The spell of the now late wizard, Lord Brelaq, still won't let Sonja die.  The Kingdom of Erkhara is now in ruins, and Brelaq and the King and Queen are dead.  While Sonja recovers, she is attacked again.  Now, she and her partner, Tuma, plan to bring the sole survivors, Prince Ederik and his bride-to-be, Princess Zaria, to the latter's home kingdom of Belanj.  But there is no rest for the weary or the wicked.

THE LOWDOWN:  In July 2021, Dynamite Entertainment's marketing department began providing me with PDF review copies of some of their titles.  One of them is The Invincible Red Sonja #7, which is the fourth issue of the series that I have read.

As usual, Amanda Conner and Jimmy Palmiotti offer a fun script and chapter.  The stars here, however, are artist Moritat and colorist Matt Carter.  Moritat offers several lovely shots of a nude Red Sonja, thick, heaving breasts aplenty.  Moritat's best is a splash page nude of Sonja's rear side, and Carter's colors shine on that ass.

Seriously, the series finds new villains, who are some seriously dark magic spewing muthas!  So now is not the time to stop reading.  Invincible Red Sonja is the bomb.

Posted by Leroy Douresseaux at 5:12 PM