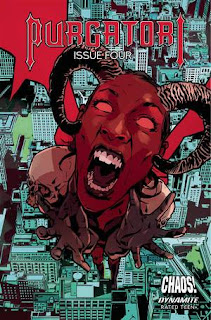 Dynamite's first solo Purgatori comic book series is Purgatori Volume 2.  It is written by Ray Fawkes; drawn by Álvaro Sarraseca; colored by Salvatore Aiala and Mohan; and lettered by Tom Napolitano.  Purgatori follows the title character as she deals with a plot against her, formulated by a coven of witches who want her immortality and power.

Purgatori Volume 2 #4 opens in the Nile Basin, Kenya.  Purgatori is about to snack on her “partner,” Asim Darwish, the last of the warriors of St. Luke, the monster-hunting society.  Luckily, he is prepared for just such a dining experience.

Purgatori has the memories of thousand of people in her head – because she ate their souls.  Now, her mind returns to Alexandria, Egypt, 1370 B.C. and the first time she ate someone.  Sometimes, the people she ate affected her.  So why are these witches trying to be a meal?  Why do they want to get into Purgatori's mind?

THE LOWDOWN:  In July 2021, Dynamite Entertainment's marketing department began providing me with PDF review copies of some of their titles.  One of them is Purgatori Volume 2 #4, which is the fourth Purgatori comic book of any kind that I've read.

Together with artist Álvaro Sarraseca, who offers beautifully drawn art, Fawkes presents a stirring dark fantasy series that continues to be an exciting read.  I didn't expect much of Purgatori; after all, I have always ignored the character.  But after four issues, I see the fun that creators can have with the character … and readers, too.