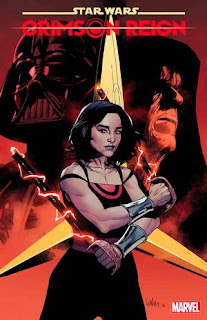 Star Wars: War of the Bounty Hunters was a Marvel Comics Star Wars publishing event that was comprised of 34 individual comic books, published from May to October 2021.  The series imagines a series of events that occur between the time bounty hunter, Boba Fett, collects Han Solo frozen in carbonite in 1980s The Empire Strikes Back (Star Wars: Episode V – The Empire Strikes Back) and his appearance in 1983's Return of the Jedi (Star Wars: Episode VI – Return of the Jedi).

Coming out of War of the Bounty Hunters is the comic book miniseries, Star Wars: Crimson Reign.  It is written by Charles Soule; drawn by Steven Cummings; colored by Guru-eFX; and lettered by Travis Lanham.  According to Marvel, Crimson Reign is the second installment of a trilogy that will reshape the history of the Star Wars Galaxy during the “Age of Rebellion.”

Star Wars: Crimson Reign #1 opens in the halls of the group known as “Crimson Dawn.”  Qi'ra of Corellia is now the group's leader.  She has taken on the killers, liars, and thieves that make up this group and has given them a purpose.

Qi'ra has gathered a diverse group:  “The Knights of Ren,” “Chanath Cha and the Orphans,” Deathstick, Ochi of Bestoon, Margo and Trinia, and the Archivist to carry out of her plans, which is to destroy the Sith in order to free the galaxy.  Her main targets, of course, are Emperor Palpatine a.k.a. “Darth Sidious” and his apprentice, Darth Vader.  Qi'ra begins her mission by sending her allies against the galaxy's criminal syndicates, but has doom for herself and her group already been foretold?

THE LOWDOWN:  I have enjoyed the vast majority of the Charles Soule's Star Wars comic book work that I have read.  I have enjoyed Steven Cummings art since I was first exposed to it in some OEL (original English language) manga from Tokyopop, including Pantheon High (2007), Star Trek: The Manga (2007), and CSI: Intern at Your Own Risk (2009).

However, Star Wars: Crimson Reign #1 isn't the kind of first issue that will inspire me to go out of my way to read the rest of the series.  It is professionally written, professionally drawn, professionally colored, and professionally lettered.  This isn't a bad comic book.  I simply have little interest in Qi'ra's conspiracy, which is contrived past the point of being credible.  I find it hard to believe that not one syndicate leader would notice that the troubles begin shortly after Qi'ra and her ilk begin meeting with the syndicates.  Does it take two issues for even one of them to figure this out?

Lucasfilm and Marvel seem determined to retcon the fuck out of the original Star Wars trilogy and the imaginary timeline surrounding it – known as the “Age of Rebellion.”  That is their prerogative, but it is mine to choose to read it.  I choose not to.  I have never been that curious about “what happened” between the films, The Empire Strikes Back (1980) and Return of the Jedi (1983).  But if that is your thing, Crimson Reign is not only a miniseries, but it is an event that will take place in various issues across Marvel's line of Star Wars comic books.


The text is copyright © 2022 Leroy Douresseaux. All Rights Reserved. Contact this blog or site for reprint and syndication rights and fees.
--------------------------
Amazon wants me to inform you that the link below is a PAID AD, but I technically only get paid (eventually) if you click on the ad below AND buy something(s).
Posted by Leroy Douresseaux at 5:26 PM