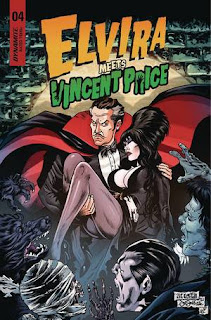 Elvira and Vincent Price team up for the first time in the comic book miniseries, Elvira Meets Vincent Price.  The series is written by David Avallone; drawn by Juan Samu; colored by Walter Pereyra; and lettered by Taylor Esposito with Elizabeth Sharland.  The series finds Elvira and Price searching for a long-lost cult movie, “Rise of the Ram,” because it contains an incantation that can save the world from destruction at the hands of the ancient Egyptian god, Amun-Ra.

Elvira Meets Vincent Price #4 (“Inglorious Bastet”) opens at “The Pyramid Fields of Abu Sir.”  Vincent Price has been vanquished … or so it seems.  Now, all that stands between Amunet and her plans to revive her hubby, Amun-Ra, from the “Western Lands” is Elvira, screenwriter Ahmed Alhazred, and Anipe the tour guide.

As Amunet reads “The Spell of the Final Day” from “The Book of the End of All Things” scroll, Elvira has a reunion with someone who can help her.  Amun-Ra rises and the entire world watches, via a “Deathflix” stream.  Will Vincent return in time to help save the day?  Can Vincent return?

THE LOWDOWN:  In July 2021, Dynamite Entertainment's marketing department began providing me with PDF review copies of some of their titles.  One of them is Elvira Meets Vincent Price #4, which is the fourth issue of the series that I have read and one of many Dynamite Elvira comic books that I have thoroughly enjoyed.

In my review of Elvira Meets Vincent Price #3, I said that I could read another 100 pages of that delightful comic book.  I feel the same way about this fourth issue.  The witty and perfectly humorous writing of David Avallone and the pitch-perfect comedy storytelling of Juan Samu make this final issue a total winner.  If there were justice in comic book awards, Avallone and Samu would at least get some kind of nomination as best writer-artist team.

The sterling painterly colors of Walter Pereyra and the spry lettering of Taylor Esposito with Elizabeth Sharland complete this superb creative team.  While we await the fifth and final issue of this series, dear readers, let's enjoy the afterglow of the fantastic Elvira Meets Vincent Price #4.

Posted by Leroy Douresseaux at 2:39 PM