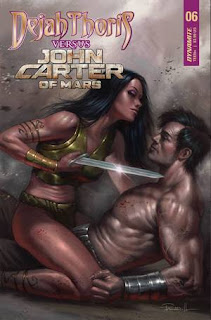 John Carter first appeared in comic books in the early 1950s, and Dejah has become a prominent comic book character since 2010 via Dynamite Entertainment.  Now, the star-crossed lovers are the stars of Dynamite's new comic book, Dejah Thoris Versus John Carter.  The series is written by Dan Abnett; drawn by Alessandro Miracolo with Vincenzo Carratu; colored by Dearbhla Kelly; and lettered by Simon Bowland.  The series finds Dejah and John caught in a war to save Mars from an ancient race, “The Longborn,” that has returned to reclaim the planet, and their surprising ally, the rogue scientist, Rotak Gall.

Dejah Thoris Versus John Carter #6 opens at the time-lost ruined palace of Dar Shadeth, in the mountains of Caldium, far in the distant west.  On the orders of Dejah Thoris, the “Holy Thern,” Kantos Kan, prepares to level the ancient ruins using radium bombs.  This will forever trap the threat of Longborn, but it will also trap Dejah and John Carter … who could both already be dead.

However, in the laboratory of the evil mastermind, Rotak Gall, Carter is alive and well and is desperately battling the Longborn.  Meanwhile, Dejah and Rotak are battling a crazed clone of … John Carter!  Can our heroes save Barsoom (Mars) and themselves?

THE LOWDOWN:  In July 2021, Dynamite Entertainment's marketing department began providing me with PDF review copies of some of their titles.  One of them is Dejah Thoris Versus John Carter #6, the sixth issue of the series that I have read and only the sixth Dejah Thoris or John Carter comic book I have read.

Issue #6 is the final issue of Dejah Thoris Versus John Carter, and writer Dan Abnett offers a slam bang ending that spans time and space.  I have to admit that I don't want this series to end because it is simply such a fun read.  Abnett's blend of sword and sorcery and pulp science fiction works in ways that I didn't think it would.

Artist Alessandro Miracolo and colorist Dearbhla Kelly translate Abnett's script into explosive comic book storytelling that not only got stronger with each issue, but always seemed to jump off the page.  Simon Bowland's lettering rings in the new year with fonts that will leave your imagination's ears ringing from this epic ending.

The ending of Dejah Thoris Versus John Carter invites the possibility of a fun follow-up that will be full of mystery and new things.  In the meantime, enjoy this, dear readers.

I READS YOU RECOMMENDS:  Fans of Dynamite's Dejah Thoris and Barsoom comic books will want to read Dejah Thoris Versus John Carter.