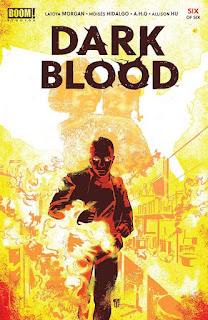 Dark Blood is a six-issue comic book miniseries created and written by screenwriter LaToya Morgan (AMC’s “The Walking Dead,” “Into The Badlands”).  Published by BOOM! Studios, the series is drawn by Moisés Hidalgo and Walt Barna; colored by A.H.G.; and lettered by Andworld Design.  The series focuses on a Black World War II veteran who discovers that he has strange powers.

Dark Blood #6 opens in 1955 – late into the Night of the Variance.  Avery confronts Dr. Carlisle and Dr. Marshall, and he learns that he is the “Variant,” the one who responded “positively” to their formula (apparently dubbed "Formula 687") and treatment.  Now, his powers are raging, and powerful as he is, it comes with a devastating cost.

Meanwhile, Sheriff Wright has finally caught up with Avery.  If Avery wants to see his wife, Emma, and daughter, Grace, again, the racist lawman insists that he must play by his rules.  But does he?  Can Avery make sure that no one ever goes through what he has?  Can he protect his wife and child?  Will it cost him everything to do this?

THE LOWDOWN:  I recently learned, via “CBS Evening News,” that the United States Air Force museum had been keeping a secret.  In 1949, a team from the famed all-Black “Tuskegee Airmen” won the first “Top Gun” contest.  This contest was a gunnery competition among pilots from across the Air Force.  However, the Air Force's record book listed the winner as “unknown.”

The winners' trophy was hidden in the bowels of the Air Force museum until a historian discovered it in 2005.  Now, the trophy is on display at Nellis Air Force Base in Nevada.  The Tuskegee Airmen have finally been recognized with Top Gun honor – 73 years after winning the first contest.

The “Red Tails” (the 332nd Fighter Group) were part of the Tuskegee Airmen, and in “Dark Blood,” Avery Aldridge” was a Red Tail.  I didn't take this revelation as mere coincidence that I learned of it less that a week before the release of the final issue of the Dark Blood comic book miniseries.

In Dark Blood, television writer-producer LaToya Morgan (AMC's “TURN: Washington's Spies”) offers a comic book that is steeped in the history of African-American participation in World War II.  Dark Blood is allegorical in the way that it references the “Tuskegee Experiment” (a study which observed the effects of untreated syphilis in Black men).  The series also opens at the dawn of the “American Civil Rights Movement” (1954-68).  Dark Blood has been historical.

Yet it was not until Dark Blood #5 that I realized how much this comic book is also a rip-roaring science fiction yarn.  The series' narrative blood is certainly Black history and culture, but Dark Blood's DNA is pulp science fiction literature.  Its pedigree is the world of weird science fiction and fantasy comic books that emerged after World War II.  While reading issue #5, the sci-fi reality of Dark Blood came at me like a space rocket.

Morgan, artists Moisés Hidalgo and Walt Barna, and colorist A.H.G. have presented readers with a comic book series that looks and feels like it came out of the 1950s.  In an alternate reality, I can see it as something that William Gaines would have published through EC Comics.  Yes, Dark Blood would have been one more nail in EC's coffin, but Morgan's mixture of reality and sci-fi would have been a perfect fit for EC's mixture of morality and blood and guts genre.

Dark Blood #6 offers both – history and drama and also the astounding yearnings of golden age science fiction.  The drama has a powerful resolution, and the super-powers are the fireworks of comic book magic.  Superheroes and mutants – Dark Blood #6 promises readers an interesting future as the series comes to an end.  Whatever may come, what we have now in Dark Blood, dear readers, it is a blast to read.  And if you haven't read it yet, Dark Blood flows at comiXology.

Posted by Leroy Douresseaux at 12:46 PM