Comics Review: Blade is the Vampire Law in "Death of Doctor Strange: Blade #1" 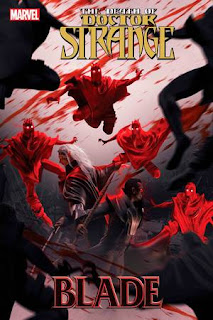 Blade is a Marvel Comics character created by writer Marv Wolfman and artist Gene Colan.  He first appeared in the comic book, The Tomb of Dracula #10 (cover dated:  July 1973), as a supporting character.  Blade is Eric Brooks, who was born a half-vampire and half-human, after a vampire attacked and killed his mother.  Possessing a vampire's speed, strength, and healing, Eric became Blade the vampire hunter and killer.

Death of Doctor Strange: Blade #1 is written by Danny Lore; drawn by Dylan Burnett; colored by Mike Spicer; and lettered by Travis Lanham.  This one-shot finds Blade, the Sheriff of the Vampire Nation, dealing with invaders from another dimension

Death of Doctor Strange: Blade #1 opens in the Vampire Nation.  Once upon a time, Doctor Strange destroyed every vampire in the world with one spell, the “Montesi Formula” (as seen in Doctor Strange  #59-62; cover-dated June to December 1983).  Strange also preserved a magical barrier around the Earth to ward off attacks from other dimensions.

What happens, however, when interlopers from another dimension invade vampire territory and put all the bloodsuckers' lives at risk?  Will Blade do his duty to protect them?  Or will he let the vampires get wiped out again?  Can he truly be a partner with Dracula, someone he neither likes nor trusts? And what exactly are these creatures from another dimension.

THE LOWDOWN:  My summary of Death of Doctor Strange: Blade #1 does not do it justice.  There is a subplot involving a group within the Vampire Nation that is spoiling for a fight with Blade.  The other-dimensional invaders are not what they seem, and Blade is not sure the invaders are all invaders, which he may or may not be wrong about.

My summary is inadequate because writer Danny Lore makes use of every page of this one-shot.  Lore offers multiple points of view, red herrings, conflicting subplots, and more.  In addition, Lore presents a Blade tale that captures the off-beat nature of the 1970s Blade stories written by Marv Wolfman and Chris Claremont for the old black and white comics magazines, Vampire Tales and Marvel Preview.  They were some of the best Blade comics ever.  I often thought of them while reading what Lore weaves in this comic book.

Dylan Burnett is the perfect artist for Death of Doctor Strange: Blade #1.  His art has an animation quality and, in some ways, resembles the work of Bruce Timm.  From a graphic and visual perspective, Burnett's work here recalls the visual style of the the 1998 Blade film, the first in a trilogy starring actor Wesley Snipes as Blade.  Burnett also captures the shifting and shifty nature of Lore's tale.

Mike Spicer's colors are perfectly garish, hinting at a neon, nightmare world of vampires.  The always reliable Travis Lanham letters this story in a way that reflects the multiple layers of the plot and its subplots.  I would love to see this creative team on another Blade comic book.  I don't know if the current Direct Market can support an ongoing Blade comic book, but certainly it could support another one-shot, if not a miniseries like this.  This is a good beginning.