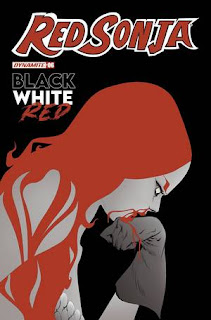 THE LOWDOWN:   In July 2021, Dynamite Entertainment's marketing department began providing me with PDF review copies of some of their titles.  One of them is Red Sonja Black White and Red #6, which is the fifth issue of the title that I have read.

“The Daring Rescue of Prince Maximilian (Beloved of All the Peoples)” by David Avallone, Jonathan Lau, Kike J. Diaz, and Jeff Eckleberry:
Envoys from the Kingdom of Levkoy have approached Red Sonja.  They offer gold if she can rescue their beloved Prince Maximilian from six brigands.  But things are not as they seem, and Red Sonja wonders if she should make a different, if not better deal.

Writer David Avallone offers a nice twist on the sword and sorcery mercenary tale with “The Daring Rescue of Prince Maximilian (Beloved of All the Peoples).”  The treat here, however, is Jonathan Lau's gorgeous art.  Not only does it recall classic Barry Windsor-Smith era and John Buscema era Conan the Barbarian, but Lau also offers inventive and eye-catching page design.

Once upon a time, I would have ignored “Morgona the Crimson.”  Over the last three decades, however, I have heard so many horrible tales of identity theft (and also “unauthorized use of an access card) that this story resonates with me.  Shannon Watters' tale is timely and visceral, and Ro Stein's art captures both a sense of dark comedy and Sonja's frustration.  Plus, this tale has a gag cartoon quality that is hard to resist.

“The Giant” by Bob Q and Hassan Otsmane-Elhaou:
A fortune teller warns Red Sonja of her demise if she takes on “the Guardian,” a giant that guards a crossing.  After her initial confrontation with the Guardian, Sonja wonders.

“The Giant” has nice art and a clever resolution.  I would like this story to be longer because I want to know what happens afterwards...

It is hard for me to pick a favorite story from the offerings in Red Sonja Black White and Red #6.  I'll call it a tie between “The Daring Rescue of Prince Maximilian (Beloved of All the Peoples)” and “Morgona the Crimson.”