Comics Review: "NIGHT OF THE GHOUL #1" Examines the Universal Monster 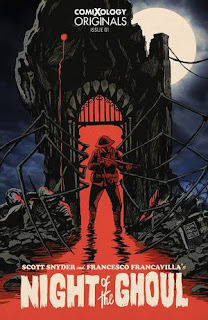 NIGHT OF THE GHOUL #1 (OF 6)
comiXology/Best Jacket Press

Night of the Ghoul #1 opens at night in the California desert – fifty miles west of Calexico.  Forest Innman and his son, Orson, race to an old folks home, where Forest will pretend to be an agent of “Northgood Health Insurance.”  Under that guise, Forest hopes to meet one of the home's residents, Charles Patrick.

Charles Patrick, however, isn't his real name.  He is really T.F. Merritt, a screenwriter and film director from the Golden Age of Hollywood.  In 1936, Merritt shot a film, “Night of the Ghoul,” that was meant to stand side by side with James Whale's Frankenstein (1931) and Tod Browning's Dracula (1931) as seminal Hollywood horror films and as instant classics.  “Night of the Ghoul,” however, never made it to the silver screen.  A mysterious studio fire destroyed the footage and killed the cast and crew at the wrap-party.  The film became a legend, but no footage was ever recovered … until now.

Inman, obsessed with horror films, found a forgotten canister of footage from “Night of the Ghoul,” and this discovery has sent him on his odyssey to meet T.F. Merritt.  But Merritt asks one important and ominous questions: has Inman watched the film?

THE LOWDOWN:  Twenty-nine of the 32 pages of Night of the Ghoul #1 are story pages.  My synopsis is really only a broad overview of what happens in this first episode.  There is an entire co-plot that is actually the depiction of the film, “Night of the Ghoul,” which artist Francesco Francavilla draws in beautiful black and white.

Francavilla and Snyder work as a single creative unit.  Snyder's story, which recalls the classic horror films of yesteryear, and Francavilla's art, which is inherently spooky, come together in one alluring package.  There is an extra creepy scene that takes place in a hall in the home that does not come across to me as ever being a script and then a series of illustrations.  It seems to have come into existence whole, so convincing is the evil that it conveys.  Night of the Ghoul is a world of shadow and fog, not creative process, one that will invite you inside … in time to kill you.

This first episode is not so much an intellectual experience as it is a reading experience that calls on the reader's memories and the emotions attached to specific memories.  The authors seem to bid you to get inside this story and feel, perhaps, feel the way you did when you first read comic books.  In that way, Night of the Ghoul is a pure pop comic book, like Francavilla's The Black Beetle comic books.

Posted by Leroy Douresseaux at 3:42 PM