Review: "THE CONJURING: The Devil Made Me Do It" is Crazy and Scary as Hell 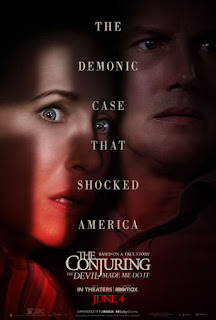 The Conjuring: The Devil Made Me Do It opens on July 18, 1981 in Brookfield, Connecticut.  Noted paranormal investigators, Ed Warren (Patrick Wilson) and Lorraine Warren (Vera Farmiga), are assisting in and documenting in the exorcism of eight-year-old David Glatzel (Julian Hilliard), which is being performed a Catholic priest.  The exorcism is also attended by David's parents; his sister, Debbie (Sarah Catherine Hook), her boyfriend, Arne Johnson (Ruairi O'Connor).  During the exorcism, the demon transports itself into Arne.  Ed witnesses this, but suffers a heart attack and falls into an unconscious state before he can warn anyone.

The following month, Ed wakes up at the hospital and reveals to Lorraine that he witnessed the demon enter Arne's body.  Meanwhile, Arne and Debbie have returned to their apartment located above Brookfield Boarding Kennels where Debbie works.  After feeling unwell, Arne murders the kennel's owner, Bruno Sauls (Ronnie Gene Blevins).  Arne is facing a capitol murder charge that could earn him the death sentence.  The Warrens insist that Arne's attorney defend him by claiming demonic possession as a defense.  Meanwhile, the Warrens have to find evidence that helps prove that Arne was possessed when he killed Bruno.  However, Ed and Lorraine are about to discover that in this investigation, they have both a human and a demonic adversary.

The Conjuring: The Devil Made Me Do It is based on the events surrounding the real life murder trial of Arne Cheyenne Johnson in Connecticut in 1981.  The film's narrative may also correspond with The Devil in Connecticut, a 1983 book about the trial written by Gerald Brittle.  Brittle is currently suing Warner Bros. and other parties, claiming they infringed upon his 1980 book about the Warrens, The Demonologist.

One thing that I have found is that The Conjuring film series is super-scary even when I don't focus on the Warrens' real-life investigations in which these film are supposedly based.  And The Conjuring: The Devil Made Me Do It is no less scary than the previous films in the series.  In fact, The Devil Made Me Do It may be the darkest entry in the series because it deals with horrendous human evil.  Director Michael Chaves wrings bone-chilling, heart-stopping terror from the horrific set pieces that make up The Devil Made Me Do It's narrative.  There is a sequence in a funeral home that had me glued to my chair, but I won't say more.  The fewer spoilers I offer, the more terror you will feel, dear readers.

Once again, Vera Farmiga and Patrick Wilson give excellent performances as the Warrens.  They have the gift of making the Warrens seem like two eccentrics who are not only a loving couple, but are also ass-kicking demon fighters.  The Conjuring: The Devil Made Me Do It is the kind of supernatural horror film that is as frightening as the best slasher horror films – with less bloodshed.  I hope The Conjuring series returns for a fourth time... and many more after that.


The text is copyright © 2022 Leroy Douresseaux. All Rights Reserved. Contact this blog or site for syndication rights and fees.
------------------------
Amazon wants me to inform you that the link below is a PAID AD, but I technically only get paid (eventually) if you click on the ad below AND buy something(s).
Posted by Leroy Douresseaux at 5:40 AM