Review: "THE CONJURING 2" is One Hell of a Scary Movie 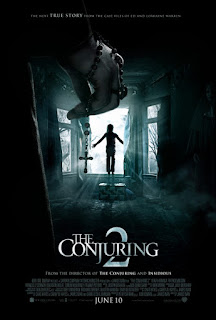 The Conjuring 2 is a 2016 supernatural horror film from director James Wan.  The film is a direct sequel to 2013's The Conjuring and is also the third film in “The Conjuring Universe.”  Like the original film, The Conjuring 2 stars Patrick Wilson and Vera Farmiga as fictional versions of real life, American paranormal investigators, Ed and Lorraine Warren.  In The Conjuring 2, the Warrens travel to North London to help a single mother and her four children who are being plagued by a supernatural spirit.

The Conjuring 2 opens in 1976.  Noted paranormal investigators, Ed and Lorraine Warren (Patrick Wilson and Vera Farmiga), are involved in the investigation of the haunting of the house in Amityville, Long Island, New York, the case that came to be known as “the Amityville Horror.”  During a seance, Lorraine is drawn into a vision where she relives the murders committed in the house by Ronald DeFeo, Jr., in which he killed his mother, father, two brothers, and two sisters.  The spirit of one of the killed children lures Lorraine to the basement, where she encounters a demonic figure that looks like a nun.  Lorraine also witnesses a horrifying fate for her husband, Ed.

The Conjuring moves forward to 1977.  In Ponders End, the southeasternmost part of the London borough of Enfield, there is a council house on Green Street that is the “Hodgson Residence.”  Here, Peggy Hodgson (Frances O'Connor) lives with her four children:  daughters, Margaret (Lauren Esposito) and Janet (Madison Wolfe), and sons, Billy (Benjamin Haigh) and Johnny (Patrick McAuley).  Peggy's husband, Richard, has abandoned them, and she struggles to support her family.

In addition to financial problems, the family has another strange problem.  Janet starts to sleepwalk and to converse in her dreams with an entity in the form of an angry elderly man who sits in the family's armchair, insisting that the Hodgson Residence is really his house.  Eventually, Janet's mother and siblings begin to witness the paranormal events surrounding her.  A media firestorm ensues and a representative of “the church” asks the Warrens to travel to London and to investigate the Hodgsons' claims.  Lorraine, however, fears that this confusing case may cost Ed his life.

As much as I liked The Conjuring, The Conjuring 2 is one of those cases in which the sequel surpasses the original.  The sequel is really scary, and is certainly a superior cinematic ghost story.  Not only is it spine-tingling, but it also made me feel tingling all over my body, especially in my thighs (TMI?).  The Conjuring 2 has some wild scenes that frightened me so much that I felt my butt checks really clinching (again, too much information?)  So, yeah, I'm trying to tell you that The Conjuring 2 is just plain scary.  It scared me so much that I was too afraid to finish it the first time I watched it.

Where I found the sequel to be superior is its emotional component in the form of Ed and Lorraine Warren.  As good as it was in the original film, in the sequel, Vera Farmiga and Patrick Wilson's screen chemistry is uncannily convincing, at least as I see it.  Their performances seem so genuine and honest that they make their version of the Warrens come across as a real, longtime, loving, married couple.

Farmiga and Wilson make The Conjuring 2 so fresh and surprising, when in many ways, it is like another spin on the really scary 1979 film, The Amityville Horror.  I have confidence that going forward the (dark) fate of The Conjuring film franchise rests in the hands of its (romantic) leads.

Posted by Leroy Douresseaux at 2:28 PM