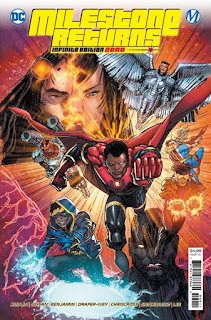 Milestone Comics was the publishing division of Milestone Media, and its comic book titles were published and distributed by DC Comics.  Milestone was founded in 1993 by a coalition of African-American artists and writers, consisting of Dwayne McDuffie, Denys Cowan, Michael Davis, and Derek T. Dingle.  Milestone Media's founders believed that minorities were severely underrepresented in American comic books and wished to address this.  In 1993, Milestone Media launched its first four titles Icon, Blood Syndicate, Static, and Hardware.  DC Comics ceased publication of all Milestone Comics titles in 1997.

Milestone Returns: Infinite Edition 0 opens with “The Big Bang.”  It is a retelling or re-imagining of “the Big Bang,” the event in which the superheroes of the Milestone Comics' “Dakota Universe” received their powers.

It begins with a “Black Lives Matter” protest in the city of Dakota.  It ends when the police shot canisters filled with an untested chemical at the protesters.  Bullied teen, Virgil Ovid Hawkins, is one of the BLM protesters exposed to the chemicals, and now he has strange powers.  Virgil isn't the only one with strange new powers, and some of those other kids are his bullies.

Meanwhile, Curtis “Curt” Metcalf, a famed scientist at Alva Industries prepares to take the blame for the use of those chemicals, so he will go on the run – as the super-weapon, Hardware.  Elsewhere, an alien stranded on Earth meets the ambitious young woman who will transform his life.  Together, they become the superhero duo, “Icon and Rocket.”  Plus, a leader steps forward.

THE LOWDOWN:  Beginning this month (June 2021), DC Comics will launch three six-issue Milestone titles, Static: Season One, Icon and Rocket: Season One; Hardware: Season One.  “The Big Bang” introduces the events of the Big Bang: the police-brutality protest gone wrong that changes the face of the city of Dakota forever by unleashing a wave of superpowers across its population.

The only original Milestone Comics titles that I read on a monthly basis were Hardware and Static.  At the time, Static read like something relevant and of the moment.  That was the opposite of the contemporary mainstream, superhero comic books that DC Comics was then publishing, which seemed focused on continuity and internal fictional mythology of the “DC Universe.”  Dakota, the setting of Static, seemed like a real city where people lived real, day to day struggles.  Even with the introduction of superheroes, Dakota felt less like fantasy and more like contemporary urban world.

“The Big Bang” doesn't feel as gritty and real as the original Static.  Still, the year 2020 was marked by the “Black Lives Matter,” anti-police violence, civil rights, and human rights protests that took off in the wake of the death of George Floyd (May 25, 2020), an African-American man murdered by a white police officer.  “The Big Bang” uses the protests of 2020 as its launching point, and that includes the protests of the police-killing of a black woman, Breonna Taylor (March 13, 2020), in her apartment.  So rather than feel real world, “The Big Bang” is connected to the real world, which I think makes its superhero fantasy relevant.

THE LOWDOWN:  Overall, I can say that if you, dear readers, are previously familiar with Milestone Comics, “Milestone Returns: Fandome Preview” will make sense to you, to one extent or another.  That is also the case with “The Big Bang” story.  I did find myself clueless about several aspects of both stories and some characters.  I like the art in both sections, especially anything drawn by the great Denys Cowan, as well as ChrisCross and Ryan Benjamin.

I am ecstatic that Milestone Comics is back.  So you might want to take the following recommendation with a proverbial grain of salt:  buy Milestone Returns: Infinite Edition Zero.


The text is copyright © 2021 Leroy Douresseaux. All Rights Reserved. Contact this blog for reprint and syndication rights and fees.

Posted by Leroy Douresseaux at 12:16 PM