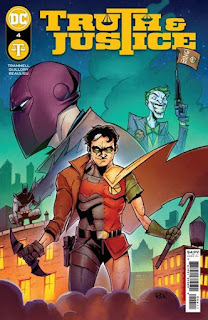 “Haunted by the Past”

Published by DC Comics, Truth & Justice is a six-issue comic book miniseries.  DC has said that “the ideals of truth and justice—concepts synonymous with DC’s superheroes from the Golden Age of Comics to the present day—are the foundation” of Truth & Justice, a anthology comic book series.  Each issue of the series features a different creative team, and is “...a platform for new, emerging storytellers to reveal their takes on popular DC characters,” according to DC.

Truth & Justice #4 (“Haunted by the Past”) opens with Jason Todd recounting his past when he was a petty thief, beginning with the moment Batman first discovered him.  Todd recalls one of the best parts of his past, fellow thief, Max Dawkins, who looked out for young Jason.  Max eventually stopped being a thief and left the streets.  Max had plans to help his community – until he was killed in an alley.

Now, Jason, as Red Hood, is on the warpath for Max's killer.  In his pursuit, however, Jason finds himself facing down his own past and wondering about his place within Batman's “Bat-Family.”  After a violent confrontation with an old Batman villain, Jason must outrun his demons … before they drag him back to the grave.

THE LOWDOWN:  I have to be honest with you, dear readers.  Truth & Justice #4 is the only issue of the Truth & Justice series that I bought, and it is the only one I intend to read.  And I only became interested in it because I am a big fan of Rob Guillory, a local comic book artist and creator, best known for his work on the Image Comics titles, Chew, and Farmhand, which he created.

Writer Jeff Trammell offers what is basically a standalone story, although this issue's shock ending promises to show up in future Red Hood comics and likely some Batman titles.  “Haunted by the Past” is basically the kind of story readers would find in a comic book “Annual.”  This story gives readers a basic look at the conflicts and internal struggles with which Red Hood must face as he makes his way as a costumed vigilante, anti-hero, and quasi-superhero.  Trammell really hits on the things that define Jason Todd/Red Hood – his origin, his death, and his resurrection, and he reveals that being Red Hood is not the end of the character's evolution.

Artist Rob Guillory's art and graphical storytelling really gets at the edginess in Red Hood and conveys his uncertain place within the world of Batman and his allies.  Guillory makes Jason Todd's angst and his conflicts with his allies feel like a real thing.  Jean-Francois Beaulieu's colors over Guillory's pencils heighten and embellish the darkness in Guillory's strong illustrations and storytelling.  It would be good to see more of this art team in other DC Comics titles.

Letterer Becca Carey emphasizes the aggressive nature of Trammell's dialogue in this story, and she creates a fast-pace that makes readers believe that everything that Jason Todd faces in “Haunted by the Past” is real.  I won't recommend Truth & Justice as a series, but I will recommend Truth & Justice #4 as a strong one-off story that any readers familiar with the Red Hood can read.

I READS YOU RECOMMENDS:  Fans of Jason Todd/Red Hood of “Bat-Family” titles will want to read Truth & Justice #4.