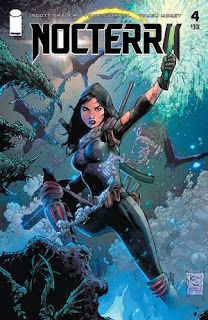 Nocterra is a horror and science fiction comic book series from writer Scott Snyder and artist Tony S. Daniels.  Published by Image Comics, Nocterra is set on an Earth that has been experiencing an everlasting night, the “Big PM,” since the sky went dark and the world was plunged into an everlasting night over a decade ago.  Colorist Tomeu Morey and letterer Andworld Design complete the series' creative team.

Valentina “Val” Riggs – call sign “Sundog,” – was in the fifth grade the day the “Big PM” occurred.  Thirteen years later (“13 PM”), Val drives a big rig hauler, a heavily-illuminated 18-wheeler known as the “Sundog Convoy.”  A skilled “ferryman” Val transports people and goods along deadly unlit roads between the few remaining human outposts, and now she has her most dangerous haul – a girl with a dangerous secret and her brother, Emory “Em” Riggs, who is becoming a Shade.

Nocterra #4 opens in Val's memories of “Day Three” of the Big PM.  She and Em are trapped in the basement, as their parents are transforming into Shades.  They are knocking at the door of the basement, determined to enter and kill their children.  Val and Em have each come up with a plan, but they always follow Val's plans.  Em wants that to change.  So what now?

Back in the present, exposed to the dark for so long, Em is changing.  Val need a “solar lamp” to slow down the change, and she knows where one is located.  It's in the outpost town of Tipton; make that “brought down” outpost town.  Even if Val gets lucky, there still is the problem of getting Bailey to Sanctuary, which might not be there.

THE LOWDOWN:  As I have written in some of my earlier reviews of Nocterra, I enjoy writer Scott Snyder's creator-owned series.  I have also told you, dear readers, that I am usually happy to read a comic book drawn by Tony S. Daniels, going back to his early days writing and drawing creator-owned titles at Image, such as The Tenth.

Well, I am having a blast reading Nocterra, which reads like an old-fashioned pulp serial with its haunting settings, crazy monsters, bad-ass villains, questionable supporting characters, and one against-all-odds female hero.  Nocterra #4 even has a theme: what to do when there only two choices, and both of them are risky, but one means destruction.

Snyder and Daniels are delivering in Nocterra the kind of work that has made them superstar comic book creators.  If you are fans of either, there is no reason that you should not be reading Nocterra.

If you are a fan of colorist Tomeu Morey, then, you want to see how beautifully he colors the dark world of Nocterra.  And I always enjoy reading the lettering of Andworld Design.  Thus, it is easy for me to give this series the highest recommendation, especially when Nocterra #4 delivers a powerful chapter that is built on a riveting backstory in order to deliver a heart-stopping last act.