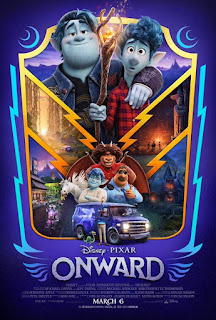 Onward is a 2020 computer-animated, comedy-drama, and fantasy film from director Dan Scanlon and is produced by Pixar Animation Studios.  Onward focuses on two elf brothers who embark on a quest to bring their late father back to life for one day.

Onward is set in an urban fantasy world that is inhabited by mythic creatures such as elves, centaurs, and pixies, to name a few.  Once upon a time, magic was common place, but over several millennia, technological advances made magic obsolete and largely discarded.  The story opens on the sixteenth birthday of an elf boy named Ian Lightfoot (Tom Holland), who is shy and struggles with self-confidence.  He has an older brother, Barley (Chris Pratt), an enthusiastic role-playing gamer and fanatic about both the history of the world and about magic.  The boys live with their mother, Laurel Lightfoot (Julia Louis-Dreyfus), a widow.

Laurel's late husband and the boys' father, Wilden Lightfoot (Kyle Bornheimer), died shortly before Ian was born.  For Ian's sixteenth birthday, Laurel gives both her boys a gift from Wilden.  The gift is a magical wizard staff, a rare Phoenix gem, and a letter describing a magical spell.  It is a “visitation spell” that can resurrect Wilden for a single day, and while Ian succeeds in casting the spell, he is unable to finish it.  As a result, Ian has summoned the lower half of Wilden's body.  Ian and Barley take their father (such as he is) and embark on a quest to complete the spell.  However, the brothers' quest is more dangerous than they know.  It will take Laurel; her boy friend, Colt Bronco the centaur (Mel Rodriguez); and a legendary figure, The Manticore (Octavia Spencer) to make sure that the brothers' quest to meet their deceased father does not end with them being deceased.

I don't want this review to spoil Onward if you have not yet seen it, dear readers.  I can say that one of the film's main themes is that people are often looking hard for something they already have.  Another theme is that sometimes we blame people for the mistakes we think they are making when it is really our lack of trust in them that leads to trouble.  And of course, the themes of relationships between brothers and of brotherly love dominate this film.

Ian and Barley carry this film, and Onward's off-beat, quest fantasy, role-playing game design and mood/mode keep the film from being just another tale of brotherly love.  In fact, the first forty minutes of the film are quite problematic, but once the film gets to the heart of the matter – Ian and Barley's quest and each brother's reason for the quest – Onward comes alive.  While Onward is not a Pixar classic, it does make strong use of the Pixar's formula of comedy, adventure, heartwarming relationship drama, and an emphasis on getting to the heart of the story.

I would never waste your time telling your that a Pixar film has magnificent animation, great colors, eye-popping environments, and striking graphics and visuals, in general.  I will say, as usual, that the voice performances are good.  I really like that Julia Louis-Dreyfus as Laurel and Octavia Spencer as “The Manticore” actually have important roles in both the drama and the action-adventure, and these two fine actress shine in their supporting roles.  Is it fate or magic that Tom Holland as Ian and Chris Pratt as Barley have … magical screen chemistry?

If not for the first half of the film, I would call Onward a Pixar classic.  As it is, it is still the kind of exceptional film that we expect of Pixar and, except for some missteps, they deliver.  And yes, I did find the world of Onward to be a bit odd, even weird, although Jeff Danna and Mycheal Danna's musical score is pitch perfect for this world.  Still, one of the highest compliments I can give a film is that by the end of it, I still wanted to watch more.  The way that the relationship between Ian and Barley plays out is something worth watching.  So I am recommending Onward.