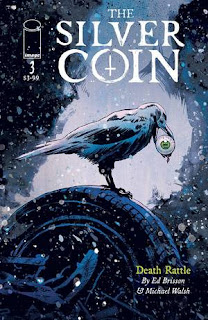 The Silver Coin is a horror comic book anthology and miniseries published by Image Comics.  It is the creation of artist Michael Walsh and writers Ed Brisson, Jeff Lemire, Kelly Thompson, and Chip Zdarsky.  Each issue of this five-issue miniseries tells a tale of terror that is set in a supernatural world in which the mysterious “Silver Coin” changes the lives of those who take possession of it.  The third issue is written by Ed Brisson; drawn and lettered by Michael Walsh; and colored by Walsh and Toni Marie Griffin.

The Silver Coin #3 (entitled “Death Rattle”) opens in 1986.  Lisa, Bobby, and Vic broke into the home of a retired fireman.  Now, their little home invasion has gone bad, and Lisa has found a mysterious coin that tells her it will help them outrun the law. But it's leading them down a path much darker.

THE LOWDOWN:  As I wrote in my reviews of the first two issues of The Silver Coin, I am a big fan of horror comic book anthologies.  That includes everything from the classic EC Comics titles to later titles like DC Comics' Ghosts and House of Mystery, Kitchen Sink Press's Death Rattle, and Approbation Comics' Amour, to name a few.

“Death Rattle,” the offering in The Silver Coin #3, moves away from ghost and slasher killer stories of previous issues.  In this story, Ed Brisson offers a vignette really, one that is like an especially dark take on an episode of “The Twilight Zone.”  I like “Death Rattle,” but as with the previous story, “Girls of Summer,” it is a shallow scare, a bit of horror fiction fluff to give the reader a momentary chill in the blood.

Once again, Michael Walsh's art and graphical storytelling is what really delivers unsettling moments of this tale.  In the end, “Death Rattle” relies on the the creator of the art and graphics to make this short, short story work.  I'll keep reading this series because of what Walsh can deliver.

[This comic book has a five-page preview of Vinyl by Doug Wagner and Daniel Hillyard.]

Posted by Leroy Douresseaux at 12:45 AM