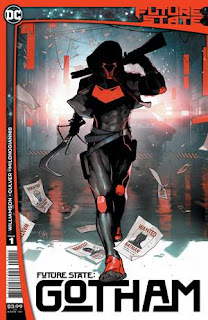 Future State: Gotham is a new black and white comic book series written by Joshua Williamson and Dennis Culver and drawn by Giannis Milonogiannis.  The series springs out of the “Future State” miniseries, Future State: Dark Detective, and focuses on Red Hood/Jason Todd as he wages a war against the “Bat-family.”  Letter Troy Peteri completes the creative team.

Future State: Gotham #1 (Batman's Land) opens with the Red Hood battling “Mecha-Scarface” and Arnold Wesker.  Although he is victorious, Jason Todd has earned the ire of the “Peacekeepers.”  Then, disaster strikes Gotham City, and all evidence points towards “the Next Batman.”  Now, Todd must choose justice over his “Bat-family,” when he is recruited by The Magistrate, which wants the Next Batman dead or alive (more the former than the latter).  Peacekeeper Red is born!

But the Magistrate is corrupt.  So what is Jason Todd up to in this forbidding world of tomorrow?

THE LOWDOWN:  “Hunt the Batman,” the debut story arc of Future State: Gotham, will run six issues.  Series writers Joshua Williamson and Dennis Culver offer a story that is explosive and has attractive and engaging characters.  They also put Jason Todd/Red Hood in a precarious position filled with uncertainty that will make for high-wire tension and nail-biting drama.

Series artist Giannis Milonogiannis renders Future State Gotham #1 in stark black and white tones.  This art evokes a gritty, noir aesthetic that recalls both the 1982 film, Blade Runner, and Katsuhiro Otomo's classic manga, Akira (serialized in Japan's Weekly Young Magazine, 1982-90).  In fact, it is not a coincidence and is fitting that this first issue reprints the Batman short story, "The Third Mask," that Otomo wrote and drew for the first Batman: Black and White (1996) miniseries.  I think that DC Comics and the creators want us to know that they are producing a comic book that exemplifies what is true to the spirit of Akira, if not being an heir to that manga.

I READS YOU RECOMMENDS:  Fans of Jason Todd and Red Hood will want to read Future State: Gotham.

Posted by Leroy Douresseaux at 11:18 AM