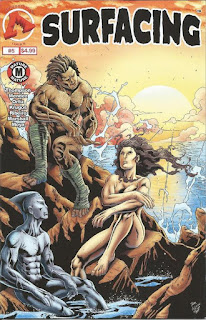 Surfacing is a comic book franchise created by B. Alex Thompson and published by Approbation Comics.  The four-issue miniseries, Surfacing: Depth Perceptions, focuses on a series of encounters, sometimes violent, between humans and mermaid-like creatures.  The eponymous Surfacing is an anthology series in which each issue offers a story in which a mermaid finds herself trapped in the world of humans.  Besides Thompson, artist Ricardo Mendez; colorist Alivon Ortiz; and letterer Krugos, currently comprise Surfacing's creative team.

Surfacing #5 opens two million years ago, on a Savannah, likely somewhere in eastern Africa.  There, a tribe of Homo erectus/ergaster resides.  Kon is a member of the tribe.  He is exceptionally good at making tools and at fishing, but in a tribe of fierce hunters, Kon's talents are seen as weaknesses.  Kon's brother, Nog, is a great hunter.

After Nog coerces him into going on a hunt, Kon is injured.  Kon goes to a nearby beach, where he submerges the bottom half of his body in the cool waters.  This leads to an encounter with a beautiful young woman.  She calls herself “Int,” and she is of the “water folk.”  Meeting Int will change Kon's life, but what will it do to his relationship his own people?

THE LOWDOWN:  As much as I enjoyed the miniseries, Surfacing: Depth Perceptions, I find myself really enjoying Surfacing, which showcases some of writer B. Alex Thompson's most imaginative writing.  Surfacing #5 offers a big shift from the usual Surfacing tales.

Thompson fanciful imagining of the eastern Africa (likely modern day Kenya) during the Early Pleistocene offers a different kind of character, while emphasizing familiar family conflict and romantic discovery.  Thompson makes every page of this story intriguing; it is as if there is always at least one thing on each page that makes me curious and want to know more.

Artist Ricardo Mendez has proved to be a perfect collaborator for Thompson in this writer-artist team.  Mendez creates a beautiful prehistoric pastoral world that is as interesting as the main story.  Speaking of which, Mendez deftly tells this first chapter of “The Stone and the Shell” via his figure drawings of the characters, which give the story a sense of naturalism.  Alivon Ortiz's muted colors allow the emotions of the characters to stand out in the story.  Krugos' lettering and sound effects are also muted, but is “pitch-perfect” for this chapter's emphasis on a budding romance.

I highly recommend Surfacing #5 and the series as a whole.  Surfacing is like nothing else you will find in mainstream, alternative, or indie comics.  It is something new and different like Neil Gaiman's The Sandman was when it debuted.

[This issue includes a three-page bonus section that reprints pages of Gleidson Ribeiro's pencil art for an earlier version of this series and this story.]

Posted by Leroy Douresseaux at 3:15 PM