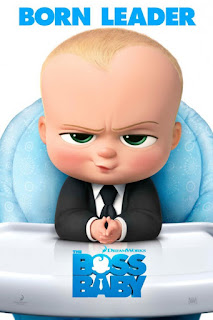 The Boss Baby is a 2017 computer-animated comedy-fantasy film directed by Tom McGrath and produced by DreamWorks Animation.  The film is loosely based on the 2007 picture book, The Boss Baby, by Marla Frazee.  The film became the first installment in “The Boss Baby” franchise.  The Boss Baby the movie follows the adventures of a suit-wearing, briefcase-carrying baby and his seven-year old brother as they try to stop a plot against the world's babies.

The Boss Baby begins with a man, Timothy Leslie Templeton (Tobey Maguire), telling the story of his childhood.  He was simply Tim Templeton (Miles Bakshi), an imaginative seven-year-old boy, the only child of his parents, Ted and Janice Templeton (Jimmy Kimmel and Lisa Kudrow).  One day, Tim is surprised to see his parents bringing home a baby, which turns out to be an infant wearing a business suit.  Tim's parents refer to the infant as Tim's little brother.  Tim is immediately jealous of the attention the new baby receives.  However, Tim is also suspicious because the baby exhibits strange behavior to which Ted and Janice are oblivious.

When Tim learns that the baby can talk, act, and move like an adult, the baby reveals that he is “The Boss Baby” (Alec Baldwin), and that he is a secret agent.  Coming to a mutual agreement in order to get what they each want, Tim and Boss Baby must stop a conspiracy against the babies of the world created by Tim's parents' employer, Puppy Co.  But can a child and an infant secret agent, who are rivals, come together long enough to save the day?

DreamWorks Animation has perfected a kind of high-concept comedy that seamlessly mixes fantasy, adventure, and action into a frothy brand of feature animation entertainment that is pleasing if not necessarily memorable.  The films of Pixar Animation Studios are always seeking something deeper in terms of character arcs, personal development, and emotional journeys in which characters often discover that the things they most want have been right there in front of them all along … or at least nearby.  This is why Pixar can tell the story of an old man who starts a new adventure in life by becoming a surrogate father to a lonely boy and a new owner to a bunch of misfit dogs, and the result is the Academy Award-winning Up.  DreamWorks Animation gives us a story of a boy and a baby who save the world from a conspiracy of puppies and bitter, weird men.  The Boss Baby gives empty affirmation to mainstream culture with its tired (white) nuclear family tropes, but at its heart, this film is merely escapist fantasy.

Like other DreamWorks Animation films, The Boss Baby's animation, visuals, and graphic design recall the television animation of the 1950s and 1960s, including Jay Ward Productions, Warner Bros. Cartoons, and Hanna-Barbera Productions, Inc., to name a few.  There is more than a touch of retro- Space Age, Atomic Age, and Googie influences.

Well, The Boss Baby isn't Pixar, and its visual style is retro, but I have to admit that this film is really entertaining.  A lot of its concepts and especially its plot and story elements are ridiculous, silly, and too far-fetched, but the film's leads, Tim and Boss Baby, have screen chemistry.  Miles Bakshi comes across like a veteran voice performer as Tim Templeton, and, of course, Alec Baldwin is a master of sly and droll comedy.  Great actor that he is, Baldwin makes Boss Baby menacing and edgy and adorable at the same time.  For the most part, I found them likable, even lovable, and I wanted to follow them on their breathtaking and ridiculous adventures.

Baldwin, Bakshi, and the voice cast make The Boss Baby succeed in spite of its contrived self.  Also of note, Eric Bell, Jr. kills it as the voice of the “Triplets.”  The Boss Baby's exciting adventure and intense action mostly overcomes the film's shallowness and absurdities.  You might not watch it a second time, dear readers, but I think that there is a good chance that you will really enjoy The Boss Baby the first time you watch it.