Comics Review: "STATIC SEASON ONE #1: is a Return of the Cool 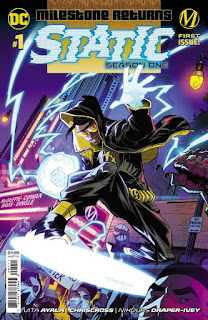 Episode One: Trial by Fire

Milestone Comics was the publishing division of Milestone Media, and its comic book titles were published and distributed by DC Comics.  Milestone was founded in 1993 by a coalition of African-American artists and writers, consisting of Dwayne McDuffie, Denys Cowan, Michael Davis, and Derek T. Dingle.  Milestone Media's founders believed that minorities were severely underrepresented in American comic books and wished to address this.  In 1993, Milestone Media launched its first four titles Icon, Blood Syndicate, Static, and Hardware, but DC Comics ceased publication of all Milestone Comics titles in 1997.

Static, Milestone's most popular superhero character, first appeared in Static #1 (cover dated: June 1993).  Static is Virgil Ovid Hawkins, an African-American teenage boy who is a member of a subspecies of humans with superhuman abilities known as “metahumans.”  Static's origin has changed since he first debuted, and now, he has gained his powers after an incident exposed him to a radioactive chemical, making Virgil capable of electromagnetic control and generation.

Both Milestone and Static are back with the launch of the new comic books series, Static (Season One), also known as Static: Season One.  The series is written by Vita Ayala; drawn by ChrisCross (layouts) and Nikolas Draper-Ivey (finishes); colored by Draper-Ivey; and lettered by Andworld Design.  The new comic book focuses on a bullied nerd who gains super-powers, only to discover that his enemy has also gained powers.

Static: Season One #1 (“Trial by Fire”) opens in Dakota City, USA in the aftermath of the “Big Bang.”  That incident happened at a “Black Lives Matter” rally that turned insane when the police released an experimental tear gas on the protesters.  Some people were maimed or died; others gained  stunning new abilities and powers.  Bullied nerd, 16-year-old Virgil Hawkins, gained powers.

THE LOWDOWN:  In the original 1990s Static, Virgil Ovid Hawkins was essentially a 1990s, African-American version of the early 1960s teenage Peter Parker/Spider-Man.  Like that classic character, Virgil/Static struggled at becoming a superhero and had to deal with what it did to his life.

Writer Vita Ayala and artists ChrisCross Nikolas Draper-Ivey present a Virgil Hawkins who is a Black teenager coming of age in this era of protests that was launched by the death of an African-American man, George Floyd, (May 25, 2020), murdered by the hands (and knee) of a White police officer.

Ayala presents Virgil as an African-American teen who may be bullied, but does not even understand the idea that he should defer, know his place, or be a second class citizen.  Will he fight back against those who attack him or turn the other cheek … or is there an entirely different path that others have not imagined?  After reading this first issue, I feel that Ayala is going to take us, dear readers, on a journey of questions and answers, but one also filled with superhero action.

The compositions and colors by Nikolas Draper-Ivey remind me of the quirky animation of the 2018 film, Spider-Man: Into the Spider-Verse, crackling with eye-popping colors and striking graphics.  It is as if Nikolas wants us to feeling the shimmering, crackling, and buzzing inside Virgil.  ChrisCross (layouts) and Draper-Ivey move the story through this issue like an electric charge running along a line, and for the final page, Cross/Nikolas gives us a … static shock.  The drama, tension, and conflict practically bleed off the page.

I thought that I would like Static: Season One #1, but I am surprised by how much I like it.  By the end, I could have read another forty pages.  If Milestone fans were unsure about moving on, this first issue will make them happy for this re-imagining of a Black superhero for the BLM generation.

I READS YOU RECOMMENDS:  Fans of Milestone Comics will want Static Season One.

[This comic book has a tribute from Denys Cowan and Chris Conroy to the late comic book artist, John Paul Leon (1972-2021), who drew the first Static comic book.  This comic book also includes a “DC Nation” “Spotlight On” interview with Joshua Williamson about Infinite Frontier #1.]


The text is copyright © 2021 Leroy Douresseaux. All Rights Reserved. Contact this blog for reprint and syndication rights and fees.