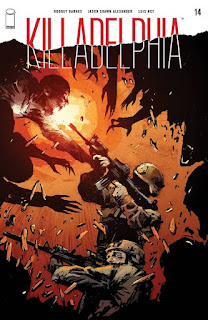 “Home is Where the Hatred Is” Part II: “...And the Sun Washed the Pain Away”

Killadelphia focuses on James “Jim” Sangster, Jr., who comes home to Philly to deal with the final affairs of his recently murdered father, revered Philadelphia homicide detective, James Sangster, Sr.  James, Sr. is not dead, but undead – a vampire.  Now father and son lead a ragtag team comprised of a medical examiner, a dead president, and a rebellious, but special young vampire in a bid to save Philly from a vampire doom.

Killadelphia #14 (“...And the Sun Washed the Pain Away”) opens with Abigail Adams in full bloom.  Like her husband, John Adams, the second President of the United States, she is a vampire.  No longer content to be the little wifey, she is determined to be the tyrannical blood queen of Philadelphia.  However, she is displeased that John has not remained … displaced.

Meanwhile, James, Sr. is trying to find a way to change James, Jr. from vampire back into a human.  Young, black and talented vampire, Tevin Thompkins a.k.a. “See Saw,” might be able to do it.  But first, there are complications, and Tevin has to see a man about a resurrection while another vampire man seeks him.

THE LOWDOWN:  Killadelphia is in its third story arc, “Home is Where the Hatred Is.”  After the pyrotechnics of the previous story arc, “Burn Baby Burn,” this new story line looks to focus on family – damned and otherwise – although this arc is also spewing forth the sounds of bloody battle.

I have said in previous reviews that writer Rodney Barnes is writing a comic book in which he is building a universe similar to what Neil Gaiman did with The Sandman.  Initially, The Sandman seemed like one thing, but by the end of its first 12 issues, and certainly by its twentieth issue, The Sandman seemed like an entirely different series.  At the beginning of Killadelphia, Barnes used the concept of the second POTUS being a vampire as a hook.  Now, via Tevin, Barnes is taking us to a new underworld, one beyond the surface vampire conflicts.  Killadelphia is a great vampire comic book because the author isn't just building a new wing in the library of vampire fiction.  He is constructing a new city-state of vampire fiction.

There is a moment in Killadelphia #14 when the art team of illustrator Jason Shawn Alexander and colorist Luis Nct recall the lurid cinema of Hammer Films.  It is in Alexander's dark, but painterly compositions, and in Nct's lurid colors that this series will sometimes recall previous vampire fiction.  However, Alexander often tells the story of Killadelphia by ripping into the neck of vampire fiction and doing new things.  When Alexander conveys the anger of Abigail Adams, it is about more than just her determination to rule.  We can be sympathetic to the fact that she won't be held down anymore by a mediocre (white) man.

Killadelphia #14 is a another great chapter in this fantastic series.  Yes, I am telling you to read it, dear readers.


Killadelphia #14 has a backup feature:
“Elysium Gardens” Part 7 “All Power to the People”

The back-up feature, “Elysium Gardens,” remains in Philadelphia, May 1st, 1985.  Angela/Zubiya and her pack of werewolves arrived in the City of Brotherly Love and found their prey, Stregherian witch, Tituba, among the Black liberation group, M.O.V.E.  Tituba is a descendant of the people who cursed Zubiya and her pack with their … condition.  Now, they are ready to kill the witch, but...

Writer Rodney Barnes makes “Elysium Gardens” both allegorical and metaphorical in the way he uses the brutality, savagery, barbarism, greed, and sin of white supremacy, racism, white colonialism, and white settler violence in the character, setting, and plot of his stories.  The werewolves are the angry Negroes, but as Barnes reveals in a mini prologue of real-world assassinations, sometimes, the oppressed have to direct their energies in other ways.

Posted by Leroy Douresseaux at 3:36 AM