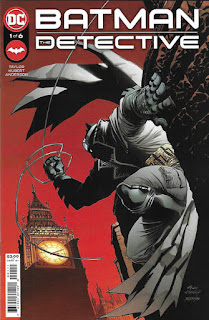 “Batman The Detective” Part One

Batman: The Detective is a new six-issue comic book miniseries.  It is written by Tom Taylor; drawn by Andy Kubert; colored by Brad Anderson; and lettered by Clem Robins.  This miniseries takes Batman on a harrowing, action-packed European adventure, in which he will meet new allies … and new enemies.

Batman: The Detective #1 opens 36,000 feet above Lancashire, England aboard Wayne Airlines, Flight 89.  It is flying from Gotham City to London with 147 passengers when tragedy strikes – and it is all Batman's fault.  This very personal and deadly message draws Batman out of Gotham to investigate, but waiting for him is an old ghost and also a name – “Equilibrium.”  This story guest-stars Knight (Beryl Hutchinson) and introduces the new Squire (Amina).

THE LOWDOWN:  Many acclaimed artists have drawn a Batman comic book or comic book series.  My favorites tend to be artists who left their mark on Batman during the last three and a half decades of the twentieth-century:  Carmine Infantino, Neal Adams, Jim Aparo, Frank Miller, and David Mazzuchelli.  The twenty-first century has offered an entire new roster of Batman artists for me to love, including an artist who has been drawing some of the most beautiful Batman comic book art for the last 15 years, Andy Kubert.

I bought a copy of Batman: The Detective #1 so that my imagination could enjoy some gorgeous Andy Kubert Batman art, and I am still thumbing through the pages of this comic book.  Kubert's aquiline and muscular Batman/Bruce Wayne is like a coiled big cat.  My favorite Kubert Batman pages are those splash pages and partial splash pages in which Kubert fills those pages with a larger-than-life Batman or a larger-than-life character, sometimes wearing a Batman-like costume.  [Early in Kubert's run as the artist of the ongoing Batman comic book series, he drew a massive Bane in a Batman costume.  Wow!]

As for the story, Tom Taylor offers a clever gimmick and hook.  Still, I think Batman: The Detective #1 is mostly flat until the second half of the story.  There is, however, potential here, but not enough for me to spend $19.95 U.S. plus tax to read the remaining five issues.  Andy Kubert is the reason that I am giving this comic book a high grade.

I READS YOU RECOMMENDS:  Fans of Andy Kubert's Batman art will want to try Batman: The Detective.