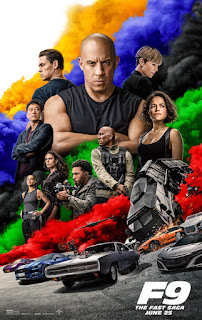 F9 is a 2021 action movie from director Justin Lin and is produced by Universal Pictures.  It is the ninth installment in the Fast & Furious movie franchise (now also called the “Fast Saga”).  A direct sequel to 2017's The Fate of the Furious, F9 finds Dom and his racing family facing a powerful figure from Dom's birth family.

As F9 begins, Dominic “Dom” Toretto (Vin Diesel) has retired from his previous life.  He is living in seclusion with his wife, Letitia “Letty” Ortiz (Michelle Rodriguez), and his son, Brian (Isaac and Immanuel Holtane), the child he conceived with his former girlfriend, the late Elena Neves.  Dom and Letty get a surprise visit from his team/family:  Roman Pearce (Tyrese Gibson), Tej Parker (Chris “Ludacris” Bridges), and Ramsey (Nathalie Emmanuel).  Their sometime compatriot, covert operative Frank Petty (Kurt Russell), a.k.a. “Mr Nobody,” apparently captured cyberterrorist, Cipher (Charlize Theron).  The plane in which Mr. Nobody was transporting Cipher was attacked by rogue agents, but Mr. Nobody was able to send a coded distress signal meant for Dom and his team.

The leaders behind this attack are Otto (Thue Ersted Rasmussen), the mysterious son of a very wealthy and politically powerful man, and Jakob (Jon Cena), a man who has close ties to Dom.  Soon, Dom's sister, Mia (Jordana Brewster), a former member of Dom's team, returns to join the hunt for Jakob.  They must stop Jakob and Otto before they can obtain and activate a device called “Aries,” which can hack into any computer system in the world.  Before this mission is over, however, Dom will have to reveal his past and his past mistakes, and he will need help from a few figures from his past – including one thought to be dead.

As I write this, it is the morning after I saw F9 at a Thursday night preview show.  I can say the same thing about F9 that I wrote about The Fate of the Furious in a review I wrote a few days ago.  I love F9.  It is the latest installment of a film franchise that has seen its over-the-top action become so … over-the-top that it is practically a kind of superhero and car chase movie series.  However,  F9 sends this franchise higher – literally – than it has ever gone before.  The ludicrous and ridiculous, but oh-so-fun set pieces are a hallmark of this franchise, but F9 actually takes two characters into space.  Gravity and physics are totally subverted, but “Fast & Furious” fans won't give a damn while watching F9 anymore than they did watching the last 12 years of this franchise.

I will give F9 credit, however, for inserting some dark and edgy family drama into the story, melodrama even darker and edgier than what The Fate of the Furious gave audiences.  And, as in that film, Vin Diesel gets to show his dramatic chops, and he reveals that Dom isn't right all the time, and that sometimes his errors really cost the people close to him.  I don't think F9 is quite as good as The Fate of the Furious because the new film's villains are not quite as diabolical as Fate's super-villain (the aforementioned Cipher).  Still, I like how F9 puts the family in the fast and the furious.