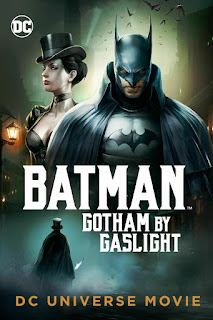 Batman: Gotham by Gaslight is a 2018 straight-to-video animated superhero film from Warner Bros. Animation and director Sam Lui.  It is the thirtieth film in the “DC Universe Animated Original Movies” series.  It is also a loose adaptation of the 1989 Batman graphic novel, Gotham by Gaslight, written by Brian Augustyn and drawn by Mike Mignola and P. Craig Russell.  Batman: Gotham by Gaslight is set in an alternate world in which Batman begins his war on crime in Victorian Age Gotham City just as Jack the Ripper begins killing women in the city.

Batman: Gotham by Gaslight opens in Victorian-era Gotham City.  A serial killer called “Jack the Ripper” is killing Gotham's poor and destitute women, especially in the area of the city known as “Skinner's End.”  Bruce Wayne (Bruce Greenwood) is also operating in the city as the bat-garbed vigilante, “the Batman.”  One night, Batman saves an unwary couple from being robbed by a trio of orphans who are in service of an abusive criminal handler.  At the same time, Pamela Isley, a prostitute and exotic dancer who performs under the name “Ivy the Plant Lady,” encounters Jack the Ripper, who savagely kills her.

Many citizens of Gotham believe that the Batman and Jack are the same man.  Stage actress, Selina Kyle (Jennifer Carpenter), is a protector of the women of “Skinner's End.”  She berates Gotham Police Commissioner James Gordon (Scott Patterson) and Chief of Police Harvey “Bulldog” Bullock (John DiMaggio) for their failure to stop the Ripper murders.  Later, when the Ripper targets Selina, Batman rescues her, but Batman discovers that Jack the Ripper is a formidable opponent who possesses the fighting skill to defeat him.  Initially, Selina rebukes Batman, but soon the two begin working together, even as the city prepares to blame Bruce Wayne for all the Ripper murders.

Writer Jim Krieg, probably one of Warner Bros. Animation's best writers (if not the best, as far as I'm concerned), has fashioned, in Batman: Gotham by Gaslight, a Batman “cinematic universe” that could be as interesting as any other world of Batman films.  Taking the source material (the Gotham by Gaslight comic), Krieg has created a world that has possibilities rather than just being a one-off, alternate-universe spin on Batman.  Batman: Gotham by Gaslight feels like it has a tangible back story behind it and an unknown, but full future ahead of it.

Krieg fills Batman: Gotham by Gaslight with highly-developed versions of familiar Batman characters.  Here, Bruce Wayne and Batman are one and the same; there is no light and dark, separate personalities so much as there is a man who understands the right time and right place to put on the correct public face – or mask, as it may be.

All the supporting characters are strong.  In fact, Batman: Gotham by Gaslight's Selina Kyle could carry her own film.  She is fierce and independent; she is beautiful and personable, even when she is being forceful in her mission to protect poor women.  Hugo Strange (William Salyers) is what some critics might call “deliciously devious,” while Alfred Pennyworth is devious in a benevolent and sly way.  And I can't help but love the “cock robins,” Dickie, Jason, and Timmy.

Batman: Gotham by Gaslight is pretty in its graphic design and art direction, and the animation moves smoothly.  Director Sam Liu oversees a film that not only plays a mystery, but offers an actually mystery that requires Batman and Selina Kyle to do some investigating.  The film's last act – a rousing section of prison escapes, brutal fights, and a burning park – is perfect escapism and also entertainment with a touch of art.  I thought that I might like Batman: Gotham by Gaslight, and I did.  I simply got far more joy out of it than I imagined I would.

Posted by Leroy Douresseaux at 9:29 PM