Comics Review: The Army of Darkness 1979 #5 Ends the Series with a Battle Royale 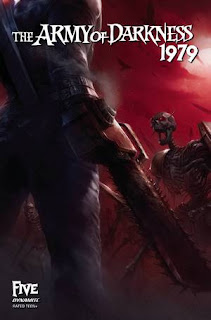 The most recent Army of Darkness comic book in the Dynamite catalog is The Army of Darkness 1979.  It is written by Rodney Barnes; drawn by Tom Garcia and Edu Menna; colored by Dinei Ribero; and lettered by Troy Peteri.  In the new series, Ash Williams finds himself in late 1970s New York City.  Not only is he fighting his usual adversaries, the Deadites and the Necronomicon, but he is also caught in a turf war between rival street gangs.

The Army of Darkness 1979 Volume 1 #5 opens with Ash reminiscing.  Of course, it ends badly.  Back to reality:  Ash is now the leader of “The Half Deads,” and he's leading them against “The Warlocks.”  The problem is that Bishop, leader of The Walocks, is in possession of the Necronomicon … and former leader of The Half Deads, Lilith, is now Bishop's arm candy.

So now, it will take a battle royale of all the gangs of New York to stop Bishop and The Warlocks.  Can Ash lead them against an invasion of Deadites?  Can Lilith stay true … to someone?

Writer Rodney Barnes brings The Army of Darkness 1979 to a rousing conclusion.  It's his best issue of the series; not only is the action good, but issue #5 is the funniest.  Edu Menna also turns in the series' best art, topped by Dinei Ribero's hot colors.  It's all under a … dynamite Francesco Mattina cover.