Comics Review: "KING OF SPIES #2" is an Ass-Pounding Good Read 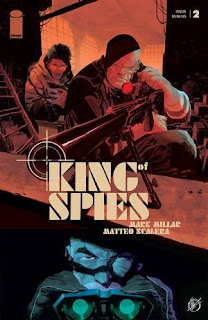 KING OF SPIES #2 (OF 4)
IMAGE COMICS/Netflix

King of Spies is a new four-issue miniseries created and written by Mark Millar.  It focuses on the world's greatest secret agent who has six months to live and won't die quietly in a hospital bed.  Published by Image Comics, King of Spies is drawn by Matteo Scalera; colored by Giovanna Niro; and lettered by Clem Robins.

British secret agent, Roland King, is 65-years-old and has just been diagnosed with Glioblastoma, the most aggressive from of brain cancer.  Facing an unusual, mid-life turned end-of-life crisis, King decides to go to war with the very system that he propped up for 40 years.  Kings, presidents, crooks, and the greedy pigs who treat everything like their personal troughs: King is coming for you.

As King of Spies #2 opens, Roland has begun his war.  There is a list names, people Roland could not touch when he was the golden boy of British intelligence.  These were people so important that the exposure of their crimes and depravities could bring down the system.  Tired of killing the wrong people, Roland is going to start killing the monsters.

While Roland is murdering every crooked politician and spymaster he blames for the world being in the state it is in right now, others have quickly realized that he is behind the killing spree of presidents and prime ministers.  So they put a “Code Black” on his name.  But who can get close enough to Roland to kill him?

THE LOWDOWN:  King of Spies is the fifth original comic book property that Mark Millar has created for Netflix since the media giant bought his comic book company, “Millarworld,” in 2017.  King of Spies is Millar's second comic book set in the world of secret agents, following the Kingsman series that began in 2012 with the miniseries, The Secret Service.

I like the two Kingsman comic book miniseries, but I have no problem saying that after only two issues, King of Spies is the better of Millar's two secret agent kill-fests.  King of Spies proves once again – if it needs proving – that Millar probably writes the best “pop comics.”  For me, a pop comic is the equivalent of a “high concept movie,” which was a big thing in Hollywood film-making in the 1980s and 1990s.  The 1992 Steven Segal hit movie, Under Siege, was described as “Die Hard on a boat.”  That was considered a “high concept.”

King of Spies is “James Bond meets John Wick,” and as a “pop comic,” it is a high-octane adventure with the kind of big action scenes that would look great on widescreen if they were in a movie.  Millar has the perfect collaborator for King of Spies in Matteo Scalera.  His is the kind of graphical storytelling that unleashes pages of kinetic action that carries the readers along on this insane adventure.   Giovanna Niro's colors are perfect for Scalera's art, which needs the glow of a bonfire behind it.  The finishing touch comes from letterer Clem Robins, who dots these pages with sound effects and sharp bursts of dialogue.

I need a cigarette … and the third issue of King of Spies.

Posted by Leroy Douresseaux at 4:23 PM