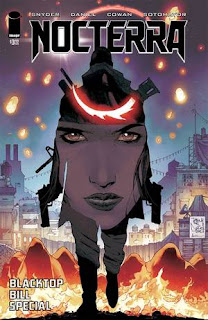 Nocterra is a horror and science fiction comic book series from writer Scott Snyder and artist Tony S. Daniel.  Published by Image Comics, Nocterra is set on an Earth that has been experiencing an everlasting night, the “Big PM,” since the sky went dark and the world was plunged into an everlasting night over a decade ago.

Nocterra's most terrifying creature is “Blacktop Bill,” whose body is bonded with a matrix of carbon nanotubes.  His origin story is the subject of a new special one-shot comic book, Nocterra Blacktop Bill Special.  It is written by Snyder and Daniel; drawn by Denys Cowan (pencils) and Kent Williams (inks); colored by Chris Sotomayor; and lettered by Andworld Design.

Nocterra Blacktop Bill Special opens somewhere in Florida.  That is where we meet “Blacktop Bill,” the so-called “hitman of hitmen,” But when it comes to killing, for Bill, there is work and then, there are “passion kills.”  Was Nocterra's most terrifying creature a monster before the “Big PM?”

THE LOWDOWN:  In Nocterra #4, on page 13 of the story, Mother Hubbard (at the “Hub Cap”) and Bea Bellweather (in Luxville, Colorado) are having a conversation over a private channel.  Bellweather wants to know the history of Blacktop Bill, and Mother starts telling what he has heard...

Nocterra Blacktop Bill Special is that story, the origin of Blacktop Bill.  I am a fan of Nocterra, one of the best new comic books of 2021, and I am a longtime fan of Denys Cowan, the artist for this special.  Writer Scott Snyder offers what seems like a folk tale side-story to Nocterra, and Cowan's art has a surreal, freestyle quality.

Honestly, I enjoyed it only a little, but I expected more.  Maybe, that's the problem.  Considering that I like Nocterra and that I am a fan of Cowan, I expected something bigger … or perhaps, better...  However, I also see it as the first of something more to come – maybe, something bigger.

Posted by Leroy Douresseaux at 4:01 PM