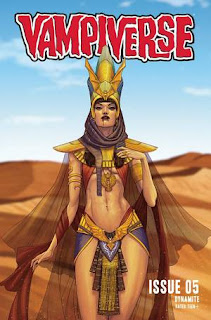 Dynamite's latest Vampirella comic book series is Vampiverse.  The series is written by Thomas Sniegoski and Jeannine Acheson; drawn by Daniel Maine; colored by Francesca Cittarelli; and lettered by Taylor Esposito.  In this new series, a Vampirella from one universe must travel the “Threads of the Fabric” and gather Vampirellas from other universes.  Their goal is to stop Bloodwing, a Vampirella who wants to kill all the other Vampirellas and also the Creator of all things, who is also known as “God” or “the Artist.”

Vampiverse Volume 1 #5 (“Now You See Her, Now You Don't!”) opens in London, 1940.  There, Agent Vampirella a.k.a. “Agent Invisirella” seeks to steal documents that will stop the Reich of Chaos.  The documents, however, are also missing pages from the “Book of Prophecy,” and Bloodwing wants them.

Meanwhile, in the Stone Age, the Vampirellas have formed a team.  There is the supernatural detective, “The Vamp,” a Vampirella who is a pulp-style hero in the vein of the old time radio and pulp fiction legend, The Shadow.  There is Lilith, the daughter of a Vampirella recently killed by Bloodwing.  The next two are “Vamp-Por,” the Vampirella from the dawn of time, and Futurella of the Reality Corp., the science fiction Vampirella.  As soon as their bond is formed, they must battle the “Chaos Beasts” in order to retrieve “Vesper,” Futurella's ship.

Meanwhile, Bloodwing, with her hostage, “Book” (the “Book of Prophecy” personified as a disembodied boy), reaches “the Library.”  Can Vampirella and her sisters of Draculon find the Library in time to stop Bloodwing?

THE LOWDOWN:  In July 2021, Dynamite Entertainment's marketing department began providing me with PDF review copies of some of their titles.  One of them is Vampiverse Volume 1 #5, one of a growing number of Vampirella comic books that I have recently read.

After a shaky first issue, Vampiverse kicked into high gear with its second through fourth issues.  Now, we come to the fifth and penultimate issue.  Writers Thomas Sniegoski and Jeannine Acheson have thrown their readers into the fire as they prepare to blow their minds with this last chapter before the finale.  Plus, they throw in a shocker – a look at who God might be...  Vampiverse is certainly giving Vampirella fans their money's worth.

I READS YOU RECOMMENDS:  Fans of Vampirella comics will want to read Vampiverse Volume 1.