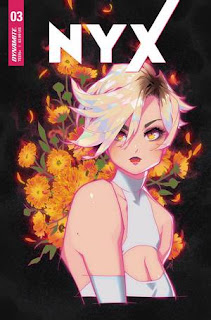 “Demon in a Bottle”

Nyx #3 (“Demon in a Bottle”) opens in the wake of Nyx's battle and conversation with her father, the Mad God Chaos.  Now, it's time for a new battle.  Nyx once killed Vampirella, but more recently, they were tenuous allies.

Now, their paths have crossed again, so will it be as friends, enemies, somewhere in between, or all of the above?  Nyx is on a quest to learn how to live among humanity without harming them, and she thinks Vampirella can give her some advice on that.  However, this is something Vampirella herself has never quite mastered?  It's a monster girls' night out – complete with binge drinking and and puking.  Plus, friends of the father decide to crash the par-tay!

THE LOWDOWN:  In July 2021, Dynamite Entertainment's marketing department began providing me with PDF review copies of some of their titles.  One of them is Nyx #3, the third issue of the series that I have read.

Nyx #1 was a powerful first issue, and Nyx #2 also had power.  For this third issue, writer Christos Gage brings in a special guest star, Vampirella, for some fun, and ultimately, “Demon in a Bottle,” is indeed a rather fun read.  This issue is also a good stand-alone (mostly) tale – a jumping-on point – that can introduce new readers to this excellent series.

Marc Borstel's art and Jordi Escuin Llorach's colors are perfect for this action-packed and comedy-packed issue.  Their unique graphical storytelling take on this series makes it stand out from the Dynamite pack.  I highly recommend Nyx for those looking for good comic books.