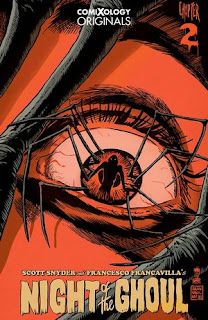 NIGHT OF THE GHOUL #2 (OF 6)
comiXology/Best Jacket Press

Night of the Ghoul #2 opens inside the film, “Night of the Ghoul,” in the scene explaining what “the Ghoul” is.  Later, World War I ends and Sgt. Kurt Powell of Eagle Company returns to America with his fellow soldier, Johnny.  However, something is wrong with Kurt, and when he is reunited with Alex, his young son, the boy recognizes it immediately.  Johnny and Alex also overhear two officers from the ship that brought them home discussing something quite unsettling.

Leaving the film, the story returns to the nursing home.  There, Merritt explains his fate since the destruction of his film.  He also forces Forest to admit that he knows more than he has let on to the old man.  What is “The Order of the Fly?”  Meanwhile, Orson is trying to escape from his father by leaving the old folks' home, but he is discovering a series of disturbing things about the place.

THE LOWDOWN:  Francavilla and Snyder continue to work as a single creative unit; at least, that is the sense I get when I read this hugely entertaining comic.  However, the star here is artist Francesco Francavilla, whose seamlessly transforms Synder's script into the kind of spooky, atmospheric comics that is his signature work – such as Afterlife with Archie and The Black Beetle.

On Page 14, Francavilla draws Orson descending a staircase at the old folks' home.  Shadows that look like bony fingers reach out towards him, and for me, that image recalls the late Edward Gorey's animations for the opening of the television series, “PBS Mystery!”  It is both beautiful and delightfully scary.

Posted by Leroy Douresseaux at 5:06 AM