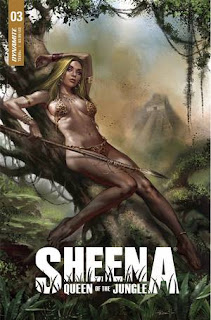 As Sheena: Queen of the Jungle, Volume 2 #3 opens, Sheena still stalks the forest of the biodome/park, trying to discover why the first visitors inside the bio-dome have disappeared.  Sheena is also trying to find her animal friends who are trapped in the park.  Using her tracking skills, Sheena hopes to find the jaguar beast that has been attacking her since she entered the park.

Sheena must face this rogue beast that may or may not be responsible for all the death and destruction in the Mega-Park.  Now, Sheena has found a survivor, Beatrice Toussaint, but there is more to this woman than Sheena can imagine – much more.  And the truth about MegaPark is revealed.

THE LOWDOWN:  In July 2021, Dynamite Entertainment's marketing department began providing me with PDF review copies of some of their titles.  One of them is Sheena Queen of the Jungle Volume 2 #3, which is the third Dynamite Sheena comic book that I have read.

The entire creative team of Sheena Queen of the Jungle Volume 2:  Stephen Mooney, Jethro Morales, Dinei Ribero; and Taylor Esposito continue to deliver a stellar series.  Fantastic story, beautiful art, glowing colors, and lively lettering:  the result is one of Dynamite's best series.  This issue's tale of Beatrice Toussaint is filled with magic and mystery.  She is this comic book's best supporting character to date.

And if you read this issue, dear readers, you will enjoy the magic and mystery.

Posted by Leroy Douresseaux at 4:58 PM