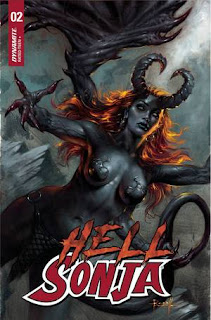 Red Sonja remained a fixture in comic books from then until about 1986.  In 2005, Dynamite Entertainment began publishing comic books featuring differing versions of the character.  One of those is a spin-off title, Hell Sonja.  The series is written by Christopher Hastings; drawn by Pasquale Qualano; colored by Kike J. Diaz; and lettered by Jeff Eckleberry.  The series focuses on a group of women who called out to a god.  Now, Hell Sonja and the former champions work together to fill Hell's belly with would-be conquerors and those most deserving of its punishment.

Hell Sonja #2 opens on an Earth (number IHC-0501-29X3052) ravaged by flood.  The Hell Sonja team comprised of Red Sonja, Gold Sonja, Moon Sonja, and Blue Sonja hear the summons of a desperate sailor.  Potentially on Hell's menu is a ghost pirate ship that drives witnesses mad on sight, but things are a bit more complicated that procuring a meal for Hell.  If the Sonjas fail, they may end up creating something quite terrible, “the Fungiverse!”

THE LOWDOWN:   In July 2021, Dynamite Entertainment's marketing department began providing me with PDF review copies of some of their titles.  One of them is Hell Sonja #2, which is one of several Red Sonja-related comic books that I have read

I really wasn't feeling the first issue of Hell Sonja.  I do realize that writer Christopher Hastings had to do a lot of explaining, and he wanted to offer the first mission to us, dear readers.  With introductions out of the way, Hell Sonja #2 gets to be straight to the point, and I have to admit that I have warmed to the idea of team Hell Sonja feeding evil creatures to Hell.  It is rather interesting when you think of the menu possibilities.

Artist Pasquale Qualano embraces the widescreen possibilities of this story, and Kike J. Diaz layers surreal colors all over it.  Hell Sonja #2 is visually and graphically splashy, topped off by Jeff Eckleberry's crackling lettering.  I am ready to recommend this to readers who followed Sonjaversal.


The text is copyright © 2022 Leroy Douresseaux. All Rights Reserved. Contact this blog or site for reprint and syndication rights and fees.
------------------
Amazon wants me to inform you that the link below is a PAID AD, but I technically only get paid (eventually) if you click on the ad below AND buy something(s).
Posted by Leroy Douresseaux at 10:56 AM